According to several reports, singer Nomoreloss has passed on after battling an undisclosed illness since January 2016.

The news broke on KemiFilani’s blog and then owner of Naijahottestgist.com and Best of Nollywood Seun Oloketuyi went on Instagram to post an RIP message. On his message there have been several other condolence messages from fans and colleagues including CapitalFemi. 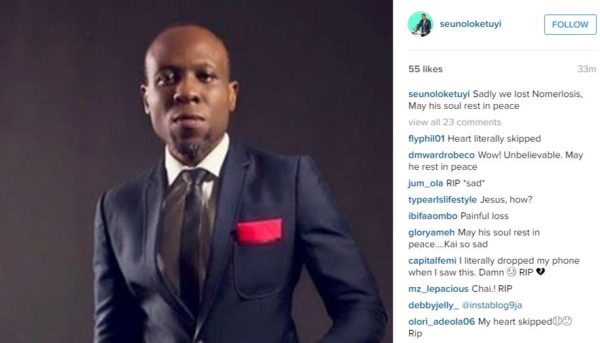 Nomoreloss’ social media page was last updated a couple of days ago on March 10.

Nigerian Twitter has been buzzing about the sad news.

Nomoreloss: We lost one of Nigeria’s most talented entertainers. One of the finest to ever grab the mic. May God comfort his friends and fam

Muyiwa Oshinuga @mr_nomoreloss not good to take things for granted, took u for granted, always saying we’ll see next weekend. Rest on friend

Man was a hustler. A hard worker. Just when things were looking like it. What really happened? RIP Nomoreloss.

Sis, @weirdmcofficial. Please When Last Have you heard from @mr_nomoreloss???????