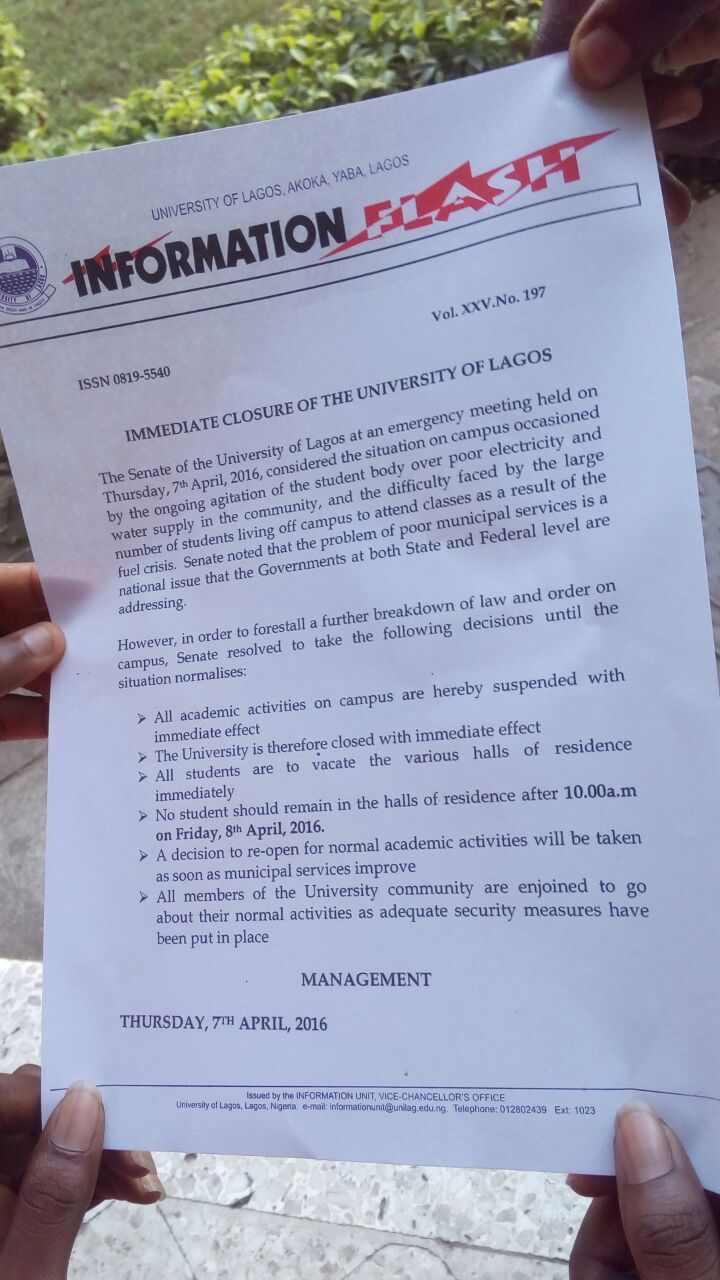 Dr Karo Ogbinaka, the Deputy Dean, Students’ Affairs, University of Lagos, has described the action of the students that led to the closure of the institution as unfortunate.

Ogbinaka disclosed this in an interview with the News Agency of Nigeria (NAN) on Friday in Lagos.

According to him, the agitation carried out by the students over poor electricity and water supply is simply shopping for reasons.

NAN reports that the university was shut on Thursday, April 7, by the university management after an emergency Senate meeting to forestall law and order on campus.

Ogbinaka said, “I want to say that the action of the students is quite unfortunate and uncalled for, going by what every body is experiencing today in the country.

“I think the students were merely shopping for reasons and I think their action remained a big disappointment to the university management.

Recall that the Vice-Chancellor, had in his magnanimity ceremony reinstated the students’ union during the institution’s 2015 convocation ceremony, 10 years after it was banned.

The same union is now creating instability on campus. In the light of the current situation in the country, the university still does its best to give students electricity every morning during lessons but they all want 24 hour power supply.

There is no way we can give them that because it is being rationed.”

Meanwhile a statement issued by Toyin Adebule, the Deputy Registrar, Information, issued on Friday in Lagos stated that the institution would remain shut till further notice.

The statement noted that it considered the difficulty faced by the large number of students living off campus to attend classes as a result of the fuel crisis.

It quoted Adebule as saying the senate noted that the problem of poor municipal services was a national issue that governments at both state and federal levels were addressing.

He noted that “however, in order to forestall further breakdown of law and order on campus, senate resolved to take the following decisions until the situation normalises.”

He said all students were to vacate the various halls of residence with immediately effect.

All members of the university community are enjoined to go about their normal activities as adequate security measures have been put in place.”

Meanwhile, students were seen leaving the campus from their respective halls of residences in large numbers to beat the deadline.

However, even with the heavy security presence on campus to ensure that the students complied with the directive, some others had vowed not to leave.

The students said that their rights were being trampled upon by management.

When asked why they were hesitating to leave as directed, some of the students who vowed to fight on had practically chased the security men away from the campus and had taken over the two entrance of the institution’s gate.

Attempts to get across to the students’ union president failed as his phone was switched off. (NAN)

Related Topics:UNILAGuniversity of lagos
Up Next