BN Single Parent Pod: Love Went Sour & Left Her with a Baby Girl... All Before She Turned 30 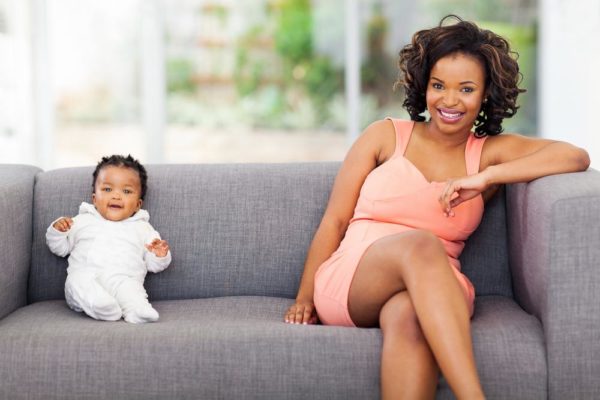 Earlier in the year, we made a call for BellaNaijarians to send in their stories about single parenting and their experiences. {Click here if you missed it} We kicked off the series with Shola’s really touching story. We were super glad one of our readers reached out to us to provide some succour to Shola.

It is with the view of knowing that we’re helping people that we’re pleased to share Anita**’s story today. Anita is a 30 year old woman whose baby is 2 years old. She recently lost her mum and is currently unemployed.

We are very empathetic to Anita’s story and we do hope that more people will share their stories. There is strength in positive numbers and it is really uplifting to know there’s someone out there who gets what you’re going through.

Finding Out I Was Pregnant
I didn’t know I was pregnant for 5 months (I had no symptoms of pregnancy-no sickness, swollen legs, tummy wasn’t big, although my period wasn’t coming but I thought it was due to depression. It had happened before; my period ceased, so I didn’t see it as a big deal or go to the clinic).

It took a girl on the street who I regularly bought things from, that told me I was pregnant. So I rushed to the hospital that day and it was confirmed.

My world came crashing. However, in the heat of the moment, I still felt an overwhelming peace which I could not explain. Outside, I was visibly shaken. I told the lab scientist to run the test again. He looked at me angrily and said ‘that is your result’.
Yeah, he must have suspected that I was pregnant outside wedlock and was almost saying “did I ask you to go and get pregnant?”

Out of the blues, my father just called while I was in the hospital asking if everything was ok and saying he would probably send me some money. You see, he has been the one supporting me since I graduated 6 years ago without a job. At the time, my mom was in the South West, while I was in the North. I had moved up North in the hope of getting a job and decided to stay. My dad had also been transferred there but I don’t live with him.

Becoming A Single Parent
There was this guy I was deeply in love with. It appeared the feeling was mutual. He always promised heaven and earth to marry me. Then, we had some issues which separated us for a while. We were both in different states in Nigeria. After breaking up with me, he still continued to call and said his heart never left me. Not knowing he already proposed to someone else. It happened that the girl was the same person he had lied about being his friend’s younger sister.

I got pregnant when I travelled to his state (in the North) to look for job after NYSC. Not knowing that he already impregnated the other girl a month before I came.

By the time I got to know, he confessed that the other girl who he had married by then, was also pregnant.
At first, he took responsibility in the first year. But as soon as I noticed he still wanted to be close to me despite having a wife at home, and probably sleep with me, I told him to stay out of my life.

He got angry and never picked my calls again. He also stopped taking responsibility for the child. My mom was my support all through this time even though she was bedridden. She sent me foodstuff and money from home every time. I still could not get a job. But I went back to school for my Masters with my 3 month old baby. It was tough as I could not even meet up with the school fees on time. Thankfully, he had given me some of the money for my fees before he left my life.

She told me not to worry, that she would always send me money whenever she had but I lost her 7 months ago. She left without a goodbye.

Difficult Parts of Sole Parenting
Hmm, the most difficult parts of parenting. I had to do practically everything on my own after giving birth. No omugwo as my mom was bedridden. My sister, a novice like me came to stay for one month and left. The bathing, hot water presses, I did on my own. I had to Google most things from Babycenter or sometimes, just common sense with prayer. Then, I read Everywoman while pregnant.

I live with the guilt of having my child grow up without her father. This guilt kills me everyday. Then, I regret engaging in pre-marital sex. I was naive. He was my first. I got pregnant at 27, had her at 28. I had kept myself until I met this guy.

She clocked 2 years on the 2nd of June and I couldn’t afford even a birthday cake or new clothes for her. I haven’t bought new clothes for her since her 1st birthday. My dad pays her creche fees and sends me stipends to live on. It is always inadequate but I am grateful to God for even the little he is doing.

Exciting Moments of Being a Single Parent
When she took her first steps. I was wowed. She had walked at 1 year, 3months. Then, the first time she stood up, I was so excited. We were always together until she started creche after she walked. I came home and cried because I missed her. We are so used to each other now. Whenever I feel sad, I just have to look at her face or quickly pick her from school. She lights up my world. She follows me everywhere from toilet, to kitchen, to bedroom.

I am most happy when I can buy things for her which makes her excited.

My Daughter’s Relationship with Her Dad
When her dad used to visit, he used to play with her and then leave after some hours. Sometimes we both went to pick her from school. But now, there’s no relationship with her father or his family. When she’s old enough to speak on phone, it will get better.

Conflicts & Resolutions
There have been serious conflicts as regards co-parenting. After I told him to leave me alone because I am not prepared to be a second wife or mistress to him. He was upset and went to report to my father, saying I told him to go and that means he can’t be responsible for the child again. He has accused me of keeping the child from him. It was a big issue in my family. All my younger ones who called him, he poisoned their hearts against me. If not that blood is thicker than water, he would have successfully turned my family against me. The extent of damage was that deep. I have forgiven him and moved on.

I haven’t made any attempt to ask him to come and see his child because I reckoned that when he is ready, he will be the one to tell me. Besides, I don’t want to make the same mistake twice.

No New Relationships
I haven’t tried to date nor had a relationship since I had her. A guy indicated interest in marrying me but with the condition that my child doesn’t live with us. I declined graciously. I can’t leave my child because of any man. I already suffer through the guilt of having her grow up without her father so, me putting her away again for whatever reason isn’t what I can do. I am all she has and I intend to be there for her.

When Things Got Tough… Here’s How I Got Help
I wake up most days with nothing. There was a time she had cough and I couldn’t afford even a 200 Naira over the counter cough syrup. I had to wait till my dad sent money.

I am only getting by through the grace of God. I live one day at a time. So many times we won’t have food to eat. Instead of beverage when she wakes up at night, I give her water. I have no friends and no one knows what I’m going through.

I still haven’t gotten a job and life became difficult after the death of my mom. I got a job in January that offered to pay 20k (with my Masters). I took it just to avoid staying at home and stop thinking about my late mom. I had to stop after one month when I could not afford the transport fare again.

I got another sales job in February which offered 30k. But it was challenging to get transport fare to go to work. I kept on borrowing money to pay fare. Then, on a particular day when I had nowhere to borrow again, I didn’t go and I was sacked.

Since then, I haven’t gotten any job. I went for an interview in April but was told the job involved a lot of travelling and working late. I told them I had a child and there was no one to support me. She goes to creche and I must pick her up by 5pm. So, it’s been challenging getting a job that will give me time to pick my child in the evening and also pay me well to take good care of her.

I love my child so much but it hurts me that I can’t provide for her. I am a very good writer. But writing isn’t paying my bills. I have tried to look for online writing jobs that will pay my bills but I haven’t been successful yet.

Hope in the Horizon
If you are also in this situation, be optimistic. It will get better. This is what keeps me going. I have also read inspiring stories of single ladies that made it after everything. Don’t give up.

**Not her real name

Wanderlust with Lola: 9 Things About Bangkok That Reminded me of Lagos