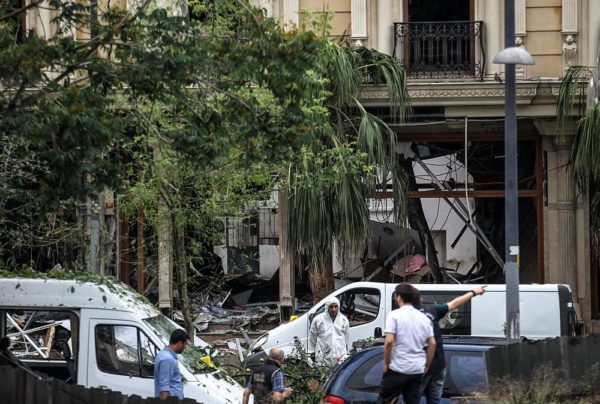 ISTANBUL, TURKEY – JUNE 7: Police officers secure the area near to the scene of a bomb attack which targeted a police bus in the Vezneciler district on June 7, 2016 in Istanbul, Turkey. At least 7 police officers and 4 civilians were killed with a further 36 people wounded after an explosion, believed to have been caused by a bomb, targeted a police bus in central Istanbul according to Istanbul governor Vasip Sahin.

Sahin said that the car was detonated as police buses passed, adding that it was the fourth major bombing in Turkey’s biggest city this year.

There was no immediate claim of responsibility but Kurdish militants have staged similar attacks, including one last month in Istanbul.

“A car-bomb attack was made against vehicles carrying our rapid-response police and passing by on the road, resulting in seven police and four civilians losing their lives. Three of the 36 wounded were in critical condition,” Sahin said.

The blast hit the Vezneciler district, between the headquarters of the local municipality and the campus of Istanbul University, not far from the city’s historic heart.

It shattered shop windows and scattered rubble over nearby streets.

“There was a loud bang, we thought it was lightning but right at that second the windows of the shop came down. It was extremely scary,” said Cevher, a shopkeeper who declined to give his surname.

The blast was strong enough to topple all the goods from the shelves of his store.

The police bus that appeared to have borne the brunt of the blast was tipped onto its roof on the side of the road.

A second police bus was also damaged and charred wreckage of several other vehicles lined the street.

Gunshots were heard in the area after the blast, the state-run Anadolu Agency reported.

Turkey has suffered a spate of bombings this year, including two suicide attacks in tourist areas of Istanbul blamed on Islamic State.

Two car bombings had earlier be detonated in the capital, Ankara, which were claimed by a Kurdish militant group.

The outlawed Kurdistan Workers Party (PKK) claimed responsibility for a May 12 car bomb attack in Istanbul that wounded seven people.

In that attack, a parked car was also blown up as a bus carrying security force personnel passed by.

The PKK, which has waged an armed insurgency against the Turkish state since 1984, frequently targets passing police and military vehicles with remote-controlled car bombs in its attacks in the largely Kurdish southeast.

Looking to study in a prestigious UK all girls’ college abroad? Come speak with representatives of Adcote College on Thursday, June 9th, 2016