2017 Budget to be Ready by October - Budget Minster Udo-Udoma 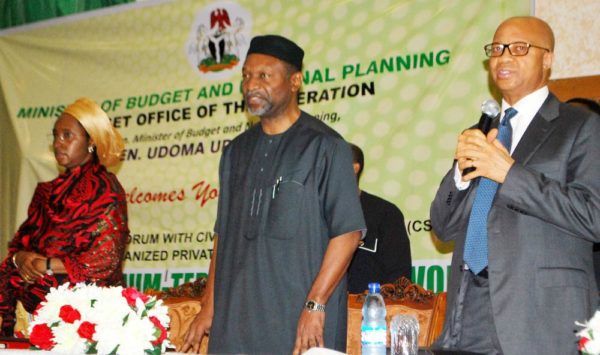 The Minister of Budget and National Planning, Udoma Udo-Udoma said the 2017-2019 Medium Term Expenditure Framework would be ready and submitted to the National Assembly for consideration by October.

Udo-Udoma said this in Abuja on Monday at a Stakeholders Consultative Forum with Civil Society Groups and organised private sector on the 2017-2019 Medium Term Expenditure Framework.

He also said the Federal Government had expended N2.1 trillion out of the N6.06 trillion approved budget for 2016 while only N253 billion of the N1.8 trillion earmarked capital projects had been spent so far.

“Demand and supply factors are expected to keep crude oil prices low in the medium term compared to the period prior to mid 2014.

Even though he did not give the projected total expenditure for the government, he talked about the revenue projection for the 2017-2019 MTEF.

“A significant increase in non-oil revenue receipts is projected due to a gradually recovering domestic economy and government’s expected improvement in FIRS tax collection efforts.

VAT collections to increase by about 42.4 per cent 2017. Operating surpluses projection have been moderated downwards for 2017 and thereafter a modest growth.

Customs collections are projected to moderated downwards for 2017 and thereafter a modest growth,” he said.

Udo-Udoma said that recoveries of misappropriated and looted funds would also form part of their anticipated revenue for the years to come.

Related Topics:BudgetUdoma Udo Udoma
Up Next

Kofi Olomide Arrested, Charged to Court in Congo & Reportedly Sentenced to One Year in Jail for Assault