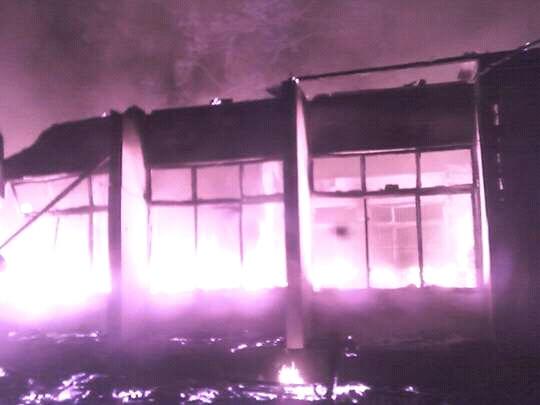 The All Progressives Congress (APC) in Rivers, has urged security agencies to hold Governor Nyesom Wike responsible for Friday’s fire at the Independent National Electoral Commission (INEC) office in Bori.

This is contained in a statement issued in Port Harcourt on Saturday by Chairman of APC in the state, Davies Ikanya.

The News Agency of Nigeria (NAN) reports that INEC office in Bori, Khana Local Government Area of the state was gutted by fire on Friday.

The party alleged that the election umpire’s office was burnt down by hoodlums suspected to be Peoples Democratic Party (PDP) members.

It recalled that Wike had on Thursday, publicly threatened INEC, its Chairman, Ikanya and Senator Magnus Abe.

According to the statement, just less than 24 hours after the threat, INEC office in Sen. Abe’s South-East Senatorial District Headquarters, Bori, was burnt down.

“This is typical of the saying that the witch cried last night and today, the child dies. Wike has, as usual, carried out his earlier threat to visit us with fire. We now know better what he meant. His boys burnt INEC office in Bori just because Bori is the senatorial headquarters of Rivers South-East where Sen. Magnus Abe hails from,” the APC said.

It alleged that Wike was encouraging killing, maiming and destruction of lives and properties for the sake of political power.

“We warned that whenever Wike resorts to throwing mud at innocent people and making unwholesome accusations, he must be up to his familiar sinister games; today, it has manifested in its fullness. Security agents should ignore his attempts to blame this heinous act on the APC or anyone else; it was obviously planned by Wike and clinically executed by his foot soldiers,” the statement added.

Shocking! NSCDC Rescues 9-year-old Chained for Weeks at a Church in Ogun