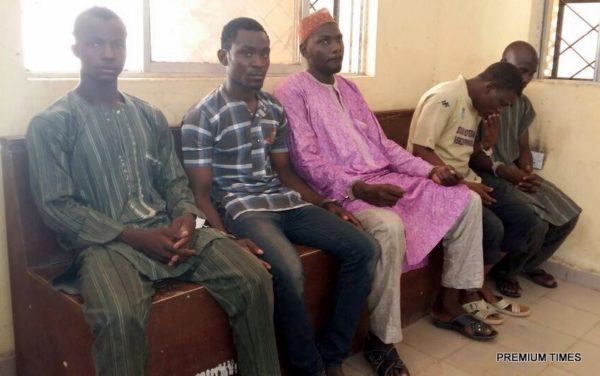 A Kano Magistrates’ Court on Wednesday denied bail to the five men who allegedly killed 74-year-old Bridget Agbaheme in Kano on June 2.

The News Agency of Nigeria (NAN) reports that Agbaheme was murdered at Kofar Wambai Market, Kano, over alleged blasphemy.

The presiding judge, Chief Magistrate Muhammad Jibril, in his ruling said the court, under Section 361 of the 1999 Constitution as amended, had the discretion to hear the bail application.

But it has no power to grant the accused persons bail, he said.

He said that the court had no power to grant the five suspects bail, though the court is convinced that investigation had been completed in the case diary sent to the State Ministry of Justice for legal advice.

Jibril, therefore, ordered the five suspects to be remanded in prison custody and adjourned the case to August 18, for further mention.

However, Gambo Abdulsalam, the Defence Counsel for all the suspects, told the court that he would forward the bail application ruling to the High Court, Kano.

He said this was to enable him seek for their bail, since the court has the right to grant them bail.

Earlier, the Prosecutor, Ekwe Sunday had opposed the bail application in view of the gravity of the offence.

He said that the suspects committed a capital offence in nature.

The prosecutor, therefore, urged the court not to grant the suspects bail because of the sensitive nature of the case.