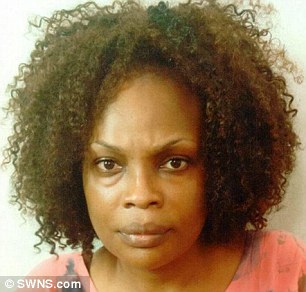 A Nigerian woman, Franca Asemota, known to her victims as Auntie Franca, used Heathrow as a hub to traffic at least 40 children and young adults into Europe, Isleworth Crown Court was told.

This is coming after Justice Abdul Kafarati of the Federal High Court sitting in Abuja on January 13th, ordered her extradition to the United Kingdom for offences bordering on trafficking of minors.

In March 2015, Asemota was arrested by the Economic and Financial Crime Commission (EFCC) on suspicion of money laundering offences.

According to DailyMail, she is accused of luring mainly orphans from remote Nigerian villages with the promise of jobs and education. The report also said she used “witchcraft, threats, ‘Ju-Ju’ rituals and sexual violence to ensure they did as they were told before being sold to the sex industry in Europe”.

According to the prosecutor, Paul Cabin, the trafficking first came to light after Agency officials stopped two groups in September and November 2011, travelling on fake passports.

Investigators later discovered that Franca’s ticket had been booked at the same time, at the same travel agent in Lagos, and she was sat next to the group on the plane.

Asemota was linked to six other “successful trafficking trips” and the kidnapping of two girls who had been placed in foster care on the south coast.

On the November flight, Cabin said:

Asemota was booked on the same flight and was also detained because the authorities were able to see that all of their tickets had been booked at the same time. She denied any involvement and was eventually released.

The two passengers detained at Heathrow were arrested and both were interviewed under caution.

Both were charged and prosecuted, initially. The male was subsequently deported back to Nigeria. The girl was in fact revealed to be just 14 years old.

She eventually told the prison authorities her real age and proceedings against her were discontinued and she was placed in the care of social services.

All five victims, from both trips, eventually gave video or audio recorded accounts to the UK authorities.

They all came from remote Nigerian villages and had all been told that they were going to be educated, trained, employed in France.

They all had difficult histories – for example, some were orphans. One was a runaway from an attempted forced marriage.

All but one reported at the time that they had been trafficked by a female who accompanied them on the aircraft from Lagos, known variously as Auntie Franca or Violet.

Cabin went on to say that some victims were “told they could be trainee hairdressers”. “It was only when they had traveled a long way from their villages were they told they were really destined for a life of prostitution,” he added.

According to Asemota’s lawyer, Jose Olivares-Chandler, she accepted that she was on the same flight with the victims, but believed she was acting as a “chaperon”. She said she was accompanying them to the UK, adding that she thought they were travelling for the first time to the UK to join their families.

“The defendant was unaware of any alleged wrongdoing” Olivares-Chandler added.