There's No Crisis in NFF, Pinnick is the Elected President - FIFA President 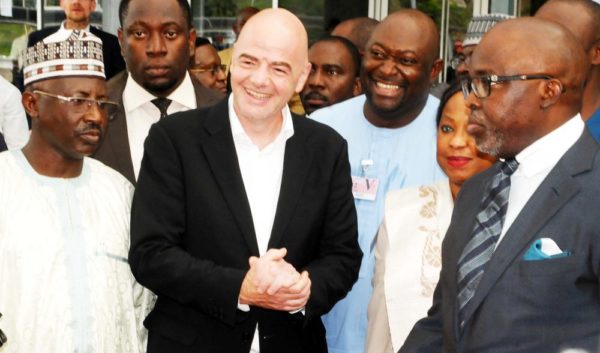 FIFA President Gianni Infantino has said that there is no leadership crisis in the Nigeria Football Federation (NFF) because the federation has a president, who was elected two years ago.

Infantino stated this on Monday while answering questions from State House Correspondents after a closed door meeting with President Muhammadu Buhari at the Presidential Villa, Abuja.

“I don’t think there is leadership crisis in the Nigeria Football Federation. There is an elected President who was elected two years ago.

The situation in a country like Nigeria is that you face some opposition from some persons who are not happy with the results, but democracy has spoken.

The Court of Arbitration, which is the Supreme Court in football, has spoken as well.

So, I think what is to be done is the work to be carried out.

The president of the Nigeria Football Federation, as well as the president of FIFA have to be judged based on their work not based on situation that might be created,” he said.

The FIFA president, who described Nigeria as “a great football country” pledged the association’s continued support in the provision of state-of-the-art facilities to boost the development of football in the country.

According to him, FIFA will look into the possibility of providing football training centres across the country.

In his contribution, the President of NFF, Amaju Pinnick, solicited for the support of the media through objective reportage of the activities of the federation.

According to Pinnick, the NFF cannot do without the media.

Do you have what it takes to be the 2016 Miss Africa Continent? Auditions are on for the “Pearl Look 2016 Talent and Beauty Pageant” in a City Near You