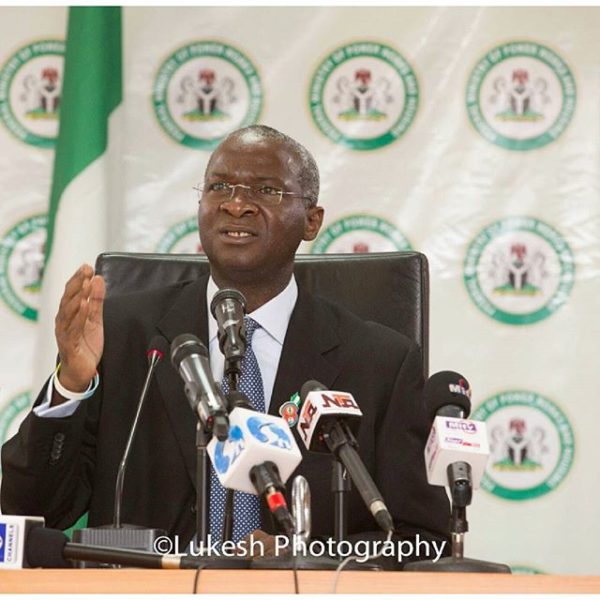 The Minister of Power, Works and Housing, Babatunde Fashola, on Thursday said in Lagos that gas alone could not bring the much needed increase in power supply in the country.

The News Agency of Nigeria (NAN) reports that the theme of the conference is entitled: “Low oil price: Impact and the way forward”.

Fashola said, “It is not gas alone that will allow us to achieve incremental power”.

“It is our most reliable source of power, yes, but it is only one solution among many other underutilised solutions.

Mambila Power Station, for example, is likely to be our most defining in the road to incremental power, situated in Taraba State.

It will potentially add 3,000MW to the grid and yet this is a hydro-electric project, not gas.

Our ministry has recently publicised our energy mix and coal forms a large part of our target fuel source,” he said.

According to him, “I am pleased to say that the Nigerian Bulk Electricity Trading Plc (NBET) is working on a suitable tariff for coal-to-power that will form the basis of a Power Purchase Agreement (PPA)”.

“Although you may not see it, it is at the point of negotiating tariff with power providers that government, through NBET, and NERC, begins to protect the interest of consumers.

Solar and other renewable energies will also play a major role in our roadmap to incremental power.

We have recently signed 14 PPAs for the delivery of 1125 MW of solar power.

Other renewable energy projects such as the 10MW wind plant in Katsina, are also in various stages of completion,” the minister said.

Also speaking, the Group Managing Director of NNPC, Dr. Maikanti Baru, said that oil prices had dropped from $110 per barrel in June 2014 to the current level slightly above $40 per barrel.

“This decline has significantly impacted on government revenue earnings as oil sector accounts for approximately 90 per cent of the nation’s foreign exchange.

The huge drop in revenue earnings poses a grave danger for the adequate funding of the national budget.

A major challenge which, therefore remains, is securing the crude volumes to a level that ensures we deliver the revenue target fully aware of the fact that price is internationally determined.

We are, therefore, working assiduously to resolve the security issues so that we can guarantee volumes,” he said.