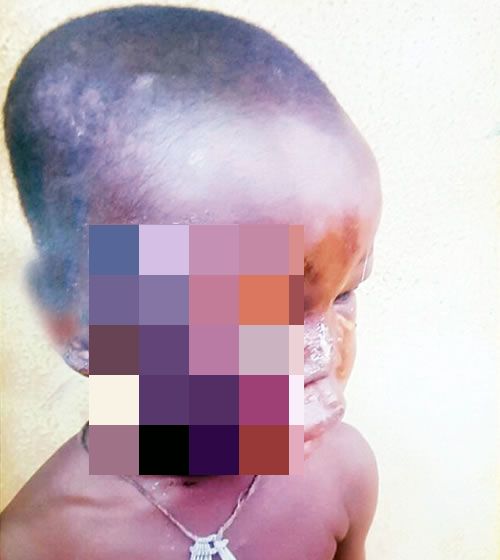 A 45-year-old man, Surakat Idowu, has been arrested for allegedly using a hot iron to cause severe injuries on his 5-year-old daughter’s eye and private part, PUNCH reports.

The incident occurred at Idowu’s residence on Kayode Toyeso Street, Liasu Road, in the Ikotun area of Lagos state.

A neighbour, seeing the brutality, reported the case at the Ikotun Police Division, and the suspect was arrested.

Idowu, an auto mechanic, who separated from his wife in 2013, tortured the victim with the iron after she slipped and fell while trying to empty her excreta in a potty into the latrine. The content of the potty spilled on the floor, and her father brutalised her for that.

A neighbour, identified only as Basirat, narrating the incident, said:

The mechanic had a quarrel with his wife and divorced her in 2013 when the girl was just two years old. On that Monday, he asked her to go and dispose of her faeces in a potty in a latrine at the backyard of the house. But the area was slippery and the girl fell, splashing the faeces on the floor.

The father became angry and got a hot iron. He began to beat her with the hot surface of the iron until the girl’s face became swollen. We tried to caution him, but he would not listen. That was how the matter got to the police.

PUNCH reports that the victim was blinded by the burns she suffered on the face, while her private part was swollen.

According to the Coordinator of the Lagos State Domestic and Sexual Violence Response Team (DSVRT), Lola Vivour-Adeniyi, “The victim is presently receiving treatment in a hospital due to the severe burns. The police have assured that the suspect will be prosecuted. When the victim completes medical treatment, she will be taken into protective custody”.

She said that DSVRT is working with the Child Protection Unit of the state Ministry of Women Affairs and Poverty Alleviation to get a shelter for the victim.

It was learnt that the state Commissioner of Police, Fatai Owoseni, also confirmed the arrest, adding that investigations were ongoing into the matter. He also directed that the case be transferred from the Ikotun Police Division to the Gender Unit at the command headquarters, Ikeja.

A police source told PUNCH that efforts were on to locate the mother of the victim after two years of separation from Idowu.