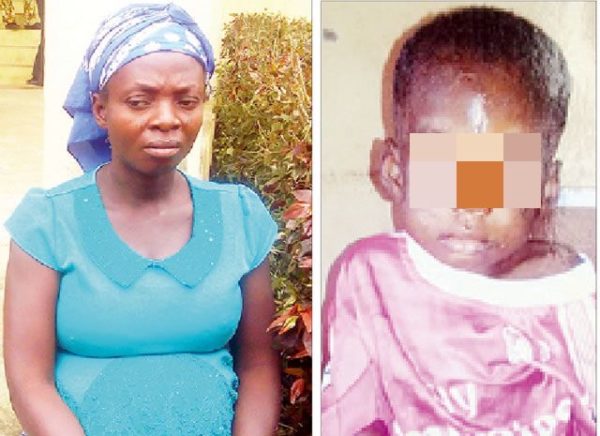 Ondo State Police has arrested a 28-year-old woman, Mary Matthew for allegedly caging a 4-year-old girl, Precious, who she suspected was a witch, for 5 months.

The suspect, who is related to the victim’s mother said she ‘quarantined’ the victim, adding that the victim was infected with HIV that reportedly killed her (victim’s) mother last year.

The suspect, a farmer, and an indigene of Enugu state, confessed to the crime, adding that she caged the victim because of her swollen legs, suspecting that she was HIV positive, hence the need to keep her away from the public to avoid the spread of the virus in the community.

“I would have taken her to the hospital for treatment but I had no money to pay for the medical bills,” Mary said.

A police officer, ASP Olayemi Ojumu, who led the team that rescued the victim, following a tip-off, told a slightly different story.

When we got to the village, we saw the girl with a swollen body. She was holding a loaf of bread. She had defecated on her body inside the cage where she was kept in the bush. They didn’t allow her to come out to live with them. They gave her food and water inside the cage.

When we asked Mary about the condition of the girl, she told us that Precious’ mother died of HIV in Enugu State and she discovered that she (Precious) had been infected with HIV by her deceased mother. She said she did not want Precious to infect her own children and that was why she kept her in the cage.

Ojumu said the suspect was arrested in June, and that the victim was treated at the police clinic in Akure.

Commissioner of Police in the state, Hilda Harrison, who paraded the suspect in Akure, said:

Mary and her husband, who alleged that the girl was possessed, decided to lock her outside the house. On receipt of the information, the personnel attached to the Juvenile Welfare Centre of the police command visited the scene and met the girl in the cage as reported.

She (Precious) was immediately rescued and taken to the police clinic for medical attention, while the suspects are under interrogation and will soon be charged to court.

She said that the victim would be taken to the welfare home of the Ondo State Ministry of Woman Affairs and Social Welfare.

According to PUNCH, the victim said, “They said I am a witch and I have HIV. They put me outside”.

Here’s your Last Chance to get Admitted to Top Schools in the UK, USA, Netherlands and Sweden This September | Meet with Reps on Monday, August 29th