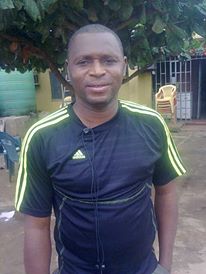 One of Nigeria’s former Junior International, Peter Ogaba has passed on aged 41.

His death was announced on the Nigeria Football Federation (NFF)‘s twitter handle on Friday.

We are shocked to hear of the sad demise of fmr Junior Int’l Peter Ogaba. Ogaba was part of the Eaglets at Canada 87 pic.twitter.com/z7LxmrnM2F

Ogaba died at his residence in Abuja after a brief illness. He was until his death Coach of an Abuja based side City Strikers FC.

May the soul of Late Peter Ogaba Rest in Peace. #RIPPeterOgaba

According to Vanguard, Ogaba was the youngest player at the FIFA 1987 U-16 World Cup in Canada, and during the U20 World Cup in Saudi Arabia, 1989.

Ogaba played in KSC Lokeren in Belgium and FC Oulu, where he won the league. His last known club was MSV Duisburg where he played in the 1993/1994 season.

10 Reasons Why You Should Grab an Apple Cider