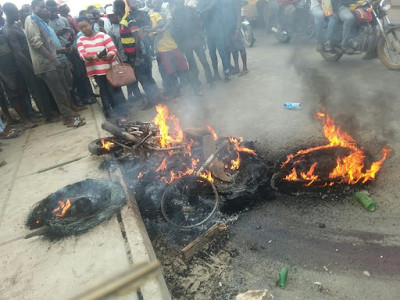 An irate mob on Tuesday evening, burnt a commercial motorcyclist accused of robbery to death at Finger bus stop along the Lagos-Badagry Expressway, PUNCH reports.

The deceased and another man on the motorcycle were alleged to have robbed some pedestrians in the area, and were being chased by police officers on patrol.

The officers reportedly shot the man behind and he fell off and was arrested.

According to an eyewitness, “The two wanted to escape on the motorcycle after dispossessing some pedestrians of their belongings. They were armed with guns. When the policemen intercepted them, the motorcyclist did not stop. But a mob waylaid him, beat him to stupor and set him on fire.”

The Lagos State Police Public Relations Officer, SP Dolapo Badmos, said she is yet to verify the incident.

Citizens must understand that taking laws into their hands is also a crime. Jungle Justice has to stop.