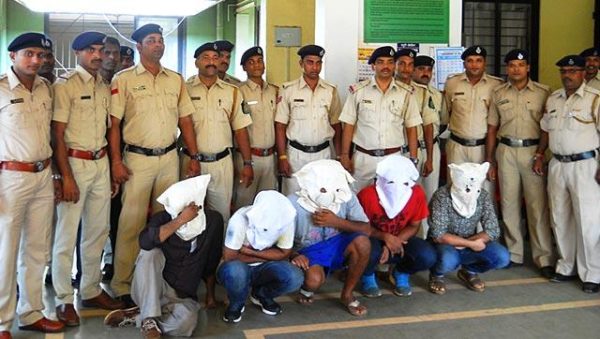 India Police in Goa With Some of the Suspects

Three Nigerians living in India were arrested at the weekend for various offences, with two of them remanded in prison after being charged with fraud.

One of them, identified as Eistabot was arrested on Saturday for beating up a cab driver over the fare in Greater Noida in Utta Pradesh.

The Nigerian is a B.Tech student at a private engineering college in the area.

Two other Nigerians were arrested by a joint team of Delhi and Goa Police for cheating several people after befriending them on social networking sites.

The duo – Chukwuma Collins, 35, and Nicodemus Obinna, 27 – used to befriend people on Facebook and then ask for money to send “necessary items” to their family members in UK, according to a report by The Times of India

Police said that the men used to fabricate  stories about the poor conditions of their family members living in western countries and ask the victims to help them with money. After receiving the money they broke all contact with the victims.

Goa Police had received a complaint from a woman, Bridget Fernandes Rai, who claimed to have been cheated of around Rs 8 lakh, about $12,000, by the duo. She said that she had befriended Collins on Facebook and after a few days of chatting he started calling her.

Rai told the police that Collins started referring to her as his sister and asked for Rs 8lakh to transfer some money and jewelry through a courier to his relatives.

He claimed that the courier was stuck in legal processes at the customs department in Goa and he needed to get it delivered quickly as his wife had expired. Rai agreed to transfer the money to his account. As soon as the money was transferred, Collins “disappeared”, Rai alleged.

“A team from Goa Police approached us in Delhi after a technical surveillance pointed to role of some people operating from here. A joint team was formed to track the accused. The duo was arrested from Mahavir Enclave in south Delhi,” said Ravindra Yadav, joint commissioner, crime.

Collins and Obinna have confessed to their crime and disclosed that they had cheated several others in a similar way. Three laptops, data cards, 36 SIM cards and 26 mobile phones were recovered from them, said The Times.

During interrogation, the duo claimed that they had arrived in India five years ago for business and then started cheating people using different techniques.

The accused were produced in a Dwarka court and taken on a transit remand by Goa Police.

Related Topics:Chukwuma Collins
Up Next