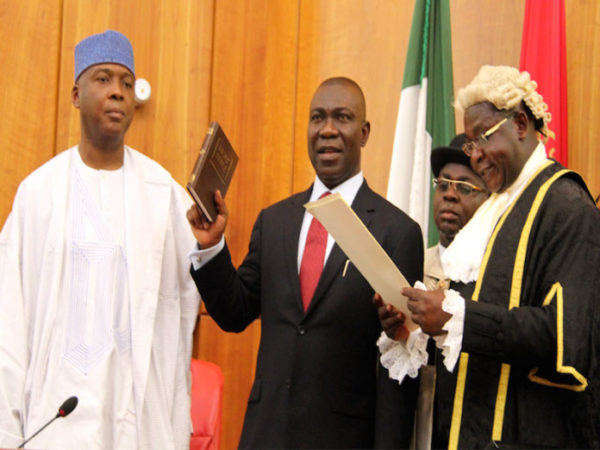 The Federal Government of Nigeria has filed a motion to withdraw the charge of criminal conspiracy against Senate President Bukola Saraki and his Deputy, Ike Ekweremadu, PREMIUM TIMES reports.

It was gathered that an affidavit in support of the motion was filed before the High Court of the Federal Capital Territory on Thursday by a litigation officer from the Federal Ministry of Justice, Odubu Loveme.

The two Senate leaders were charged alongside a former Clerk of the National Assembly, Salisu Maikasuwa and his deputy, Benedict Efeturi.

The Principal officers were accused of illegally altering the Senate’s Standing Rule used in electing leaders and inaugurating the upper legislative chamber on June 9, 2015.

Loveme said Aliyu Umar (SAN), who is the counsel to the Federal Government “had decided to amend the charge in the manner stated on the face of the motion paper.”

In the amended charge, only Maikasuwa and Efeturi would face prosecution.

“Salisu Maikasuwa and Benedict Efeturi, on or about the 9th day of June 2015 at the National Assembly Complex, Three Arms Zone, Abuja within the jurisdiction of this honourable court agreed to do an illegal act, to wit to make the Senate Standing Orders 2015 as amended without the authority of the 7th Senate of the Federal republic of Nigeria which act was committed by yourselves and that you thereby committed the offence of criminal conspiracy,” Count 1 of the amended charge read.

They are also accused of forging a document punishable under section 366 of the Penal Code Act ( Northern States) Federal Provisions Act, 1960, Cap 345, Laws of the Federation 1990 (as amended), and giving false information with the intention to mislead the public.