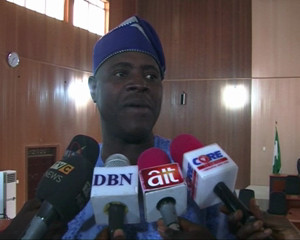 The lawmaker representing Ikole Constituency 1, Gboyega Aribisogan, has been suspended from the Ekiti State House of Assembly for 180 legislative days for alleged anti-party activities, PUNCH reports.

A seven-man Ad hoc panel had recommended that Aribisogan be suspended after finding him guilty of gross misconduct and acts capable of destabilising the Assembly and the state government against him.

The panel, headed by Jeje Samuel submitted its recommendations to the Ethics and Privileges Committee of the House and adopted at a plenary presided over by the Speaker, Kola Oluwawole.

Aribisogan was also barred from holding any position of responsibility for the House and is not to be seen in or around the premises of the assembly within a 1km radius.

The embattled lawmaker, a former Information Committee Chairman was accused of meeting with the opposition and sharing information with them.

Aribisogan was accused of meeting with enemies of the state government, which they described as tantamount to anti-party activities.