Total cases of coronavirus infections in Nigeria now over 10,000

Nigeria has recorded 307 new coronavirus infections, bringing the total cases to 10,162. This was stated by the Nigeria Centre for Disease Control (NCDC) on Sunday night.

A breakdown of cases by state can be found via https://t.co/zQrpNeOfet#TakeResponsibility pic.twitter.com/O0hucdINbd

CAN issues guidelines for the reopening of churches

The Christian Association of Nigeria (CAN) has issued draft guidelines for the reopening of churches in the country. This is contained in a statement signed by CAN President, Samson Ayokunle.

Ekiti State governor, Kayode Fayemi, on Sunday announced shifting of the lockdown in the state to Saturdays and Sundays effective from June 1. He also gave hope that markets, schools & place of worship will be reopened soon after the consultations with stakeholders of the different areas.

The statement signed by the governor states that residents of the state will now have free movement for their daily activities from Monday to Friday between six in the morning and eight in the evening. Civil servants on Grade Level 8 and above will resume duty, while those on Grade Level 7 and below are to remain at home till further notice.

Commencing from June 1, 2020, Ekiti people will now be able to go about their daily activities from Monday to Friday, 6am to 8pm in the evening.

The dusk to dawn curfew will daily resume at 8pm till 5: 59 am of the following morning. pic.twitter.com/fDOS6HX25D 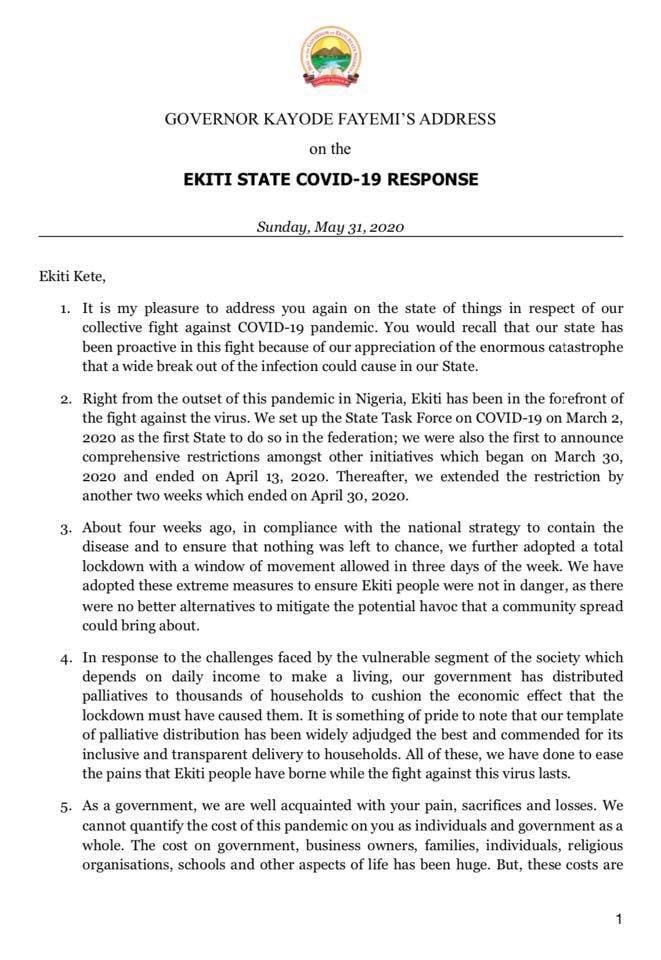 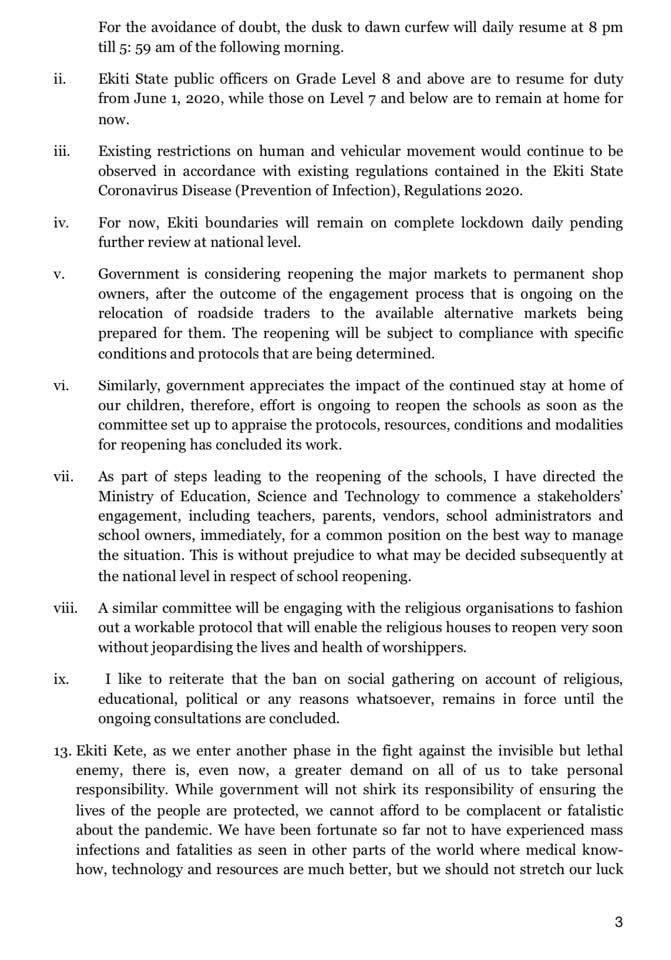 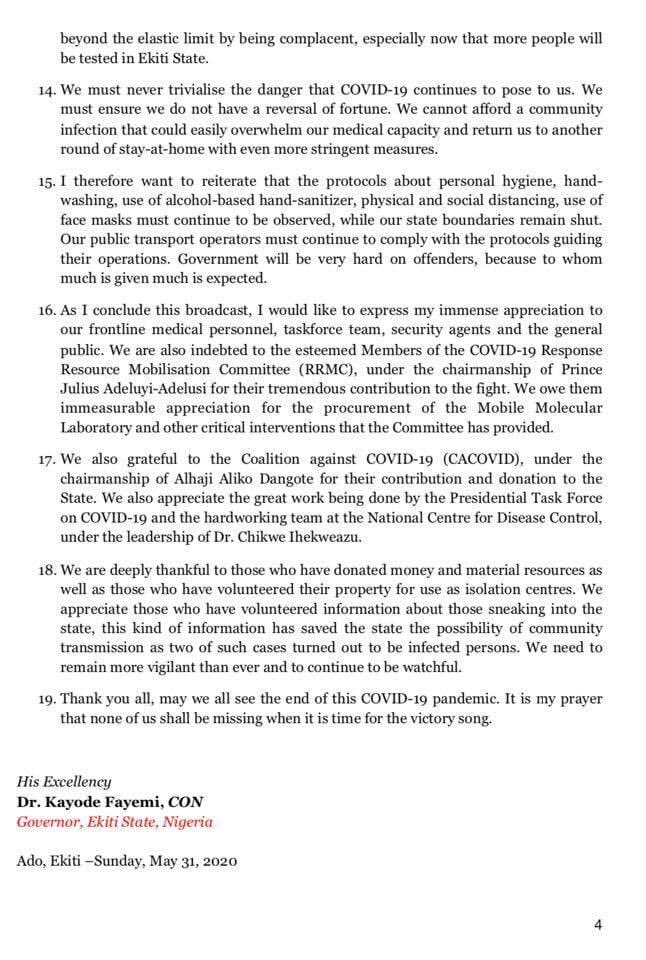 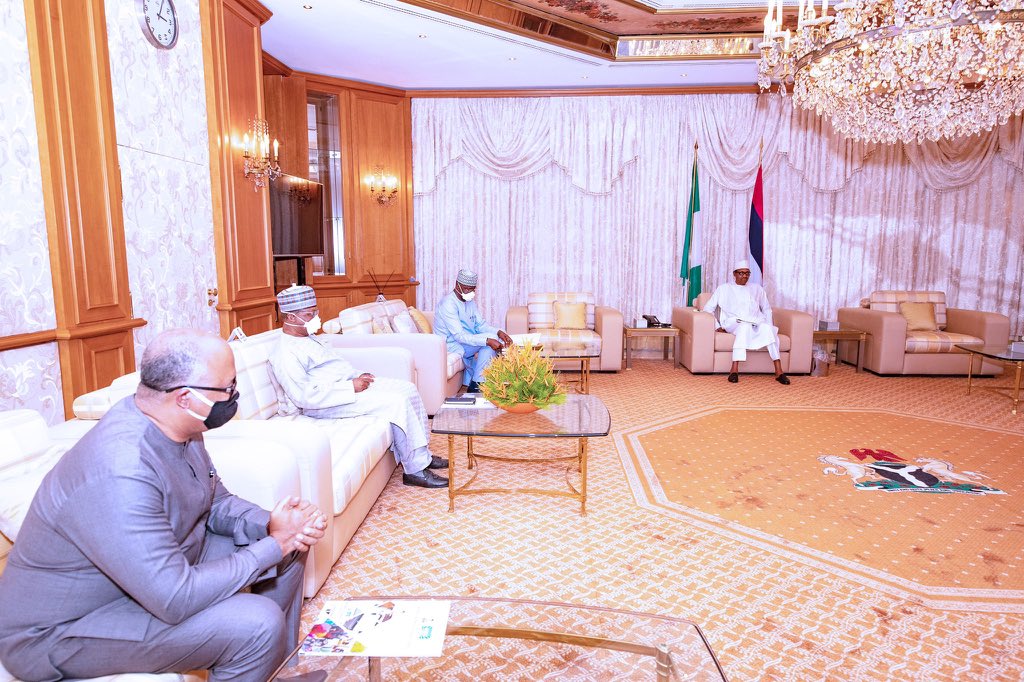 On Sunday, President Muhammadu Buhari received a briefing from members of the Presidential Task Force (PTF) on COVID-19 at his residence at the State House, Abuja.

The Chairman of the Task Force and SGF, Boss Mustapha led the delegation to the presidential villa. Mustapha briefing journalists after the meeting at the Presidential Villa said the task force had made recommendations to the President, Punch reports.

According to what he told newsmen, states will now manage the pandemic, with coordination by the Federal Government. Responding to a question on states reopening worship centres said the issue was discussed at the meeting. He said:

That is part of what we have considered in its totality. We await Mr President’s decision on that. Once I receive his approval, going forward, as to certain recommendations that we have put in place, we will see how that happens. The issue of easing up, you know we were in the first phase and we had an extension of two weeks for the first phase. The next phase should be the second phase and along with that, we came with a lot of recommendations which we expect Mr President to consider.

The SGF also said the PTF had reviewed the issues of places of worship, schools and businesses, saying “we have made the appropriate recommendations.”

When asked if the economy would be opened soon, the PTF chairman said:

We have started, even in the first phase and the extension that came with it. The essential part of the economy was opened up by way of allowing agricultural production and people who produce fertiliser. The oil and gas industry was never closed for one day. Haulage, refining and prospecting continued. Some parts of the financial sector were opened.

After we receive the approval of Mr President tonight or tomorrow (Monday) morning, we will now know which (other) segment of the economy is allowed to open. 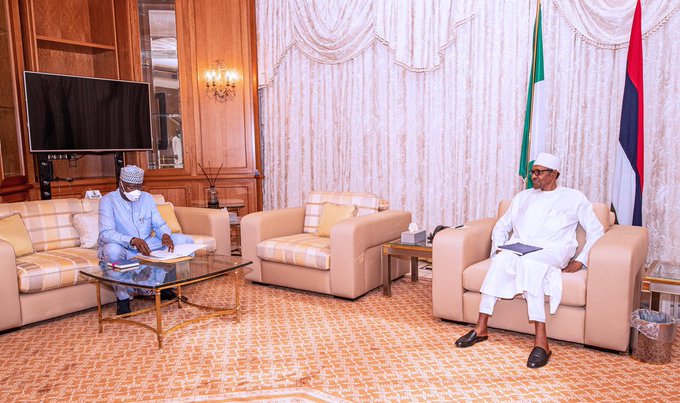 Today, President @MBuhari received briefing from members of the Presidential Task Force (PTF) on COVID–19 at his residence at the State House, Abuja.#AsoVillaToday pic.twitter.com/2EN8xPcsSM 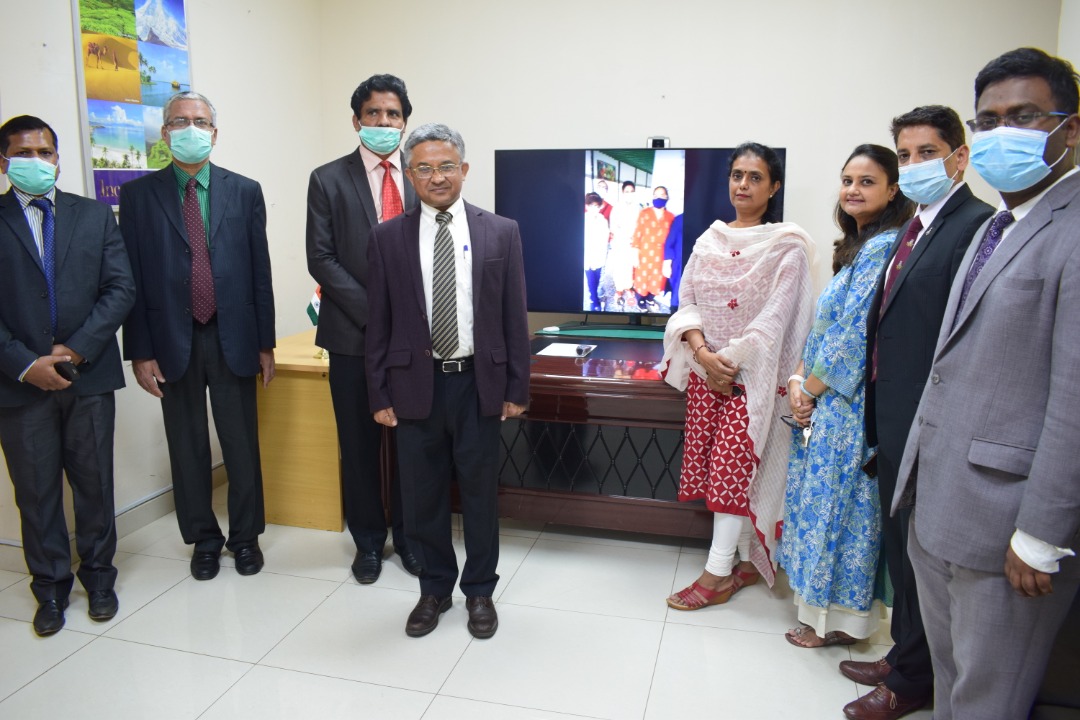 The Indian government on Sunday commenced the evacuation of its citizens stranded in Nigeria as a result of the coronavirus pandemic.

According to a tweet by the High Commission of India in Abuja, the repatriation exercise was conducted in the early hours of Sunday with the airlifting of 312 Indian nationals. The Commission revealed that the aircraft conveying the evacuees departed the Murtala Muhammed International Airport, Lagos.

It noted that the flight, operated by a Nigerian airline Air Peace, was the first indigenous airline to fly directly to India. The Indian authorities appreciated the Nigerian government for its support in ensuring that the first phase of the evacuation was successful.

Repatriation of Indian nationals from Nigeria began today with the Lagos-Kochi Air Peace flight. With 312 passengers, it is also the first-ever Nigerian airline to fly directly to India. Thank @MEAIndia @MoCA_GoI @PIBHomeAffairs @NigeriaGov and team @india_nigeria for support. 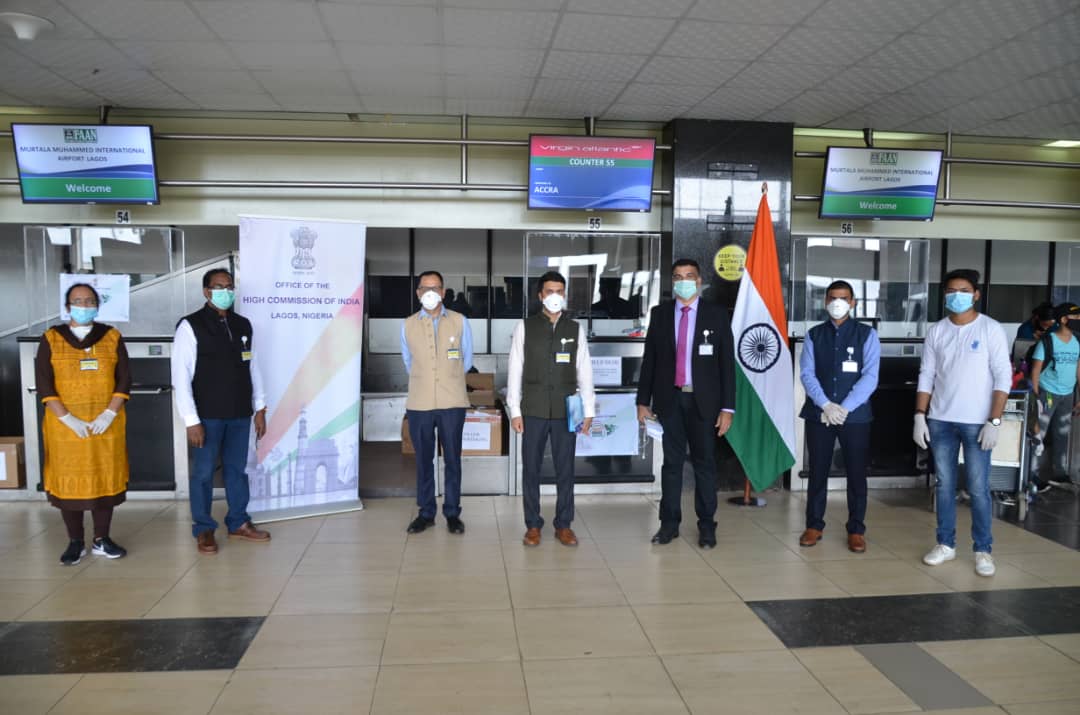 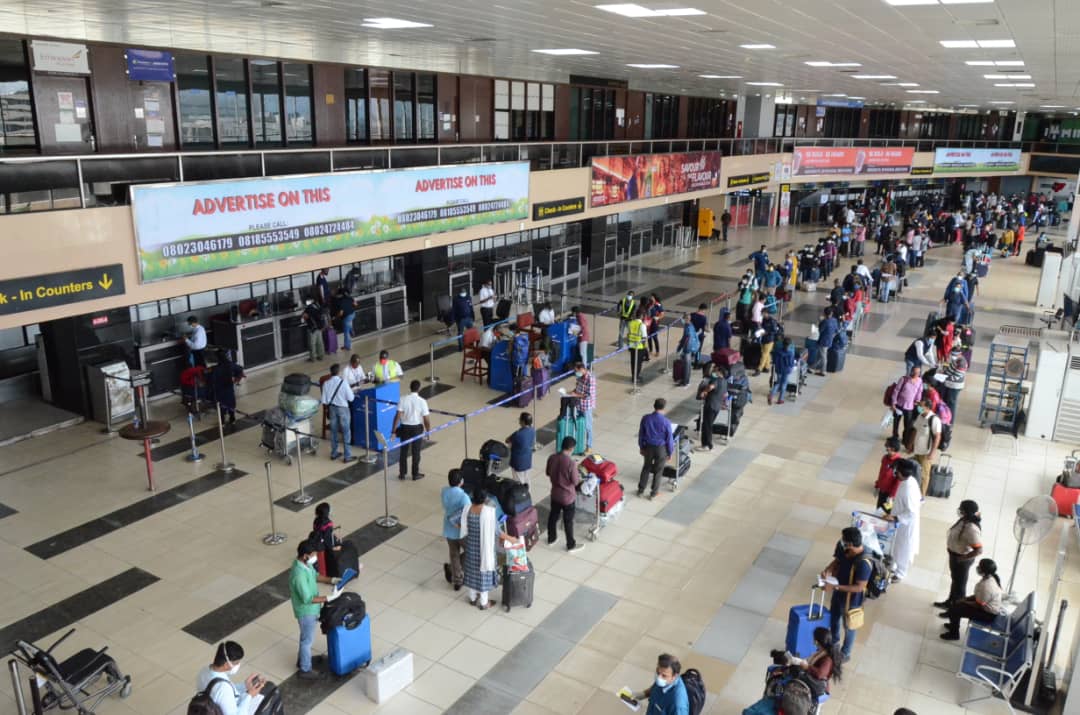 Lagos set to reopen economy, kicks off a register-to-open initiative

The Director-General, Lagos State Safety Commission, Lanre Mojola has disclosed that the Commission is set to begin the Register-To-Open initiative of the State Government.

Speaking recently at a Press Conference organised to inform the general public about the State Government’s plan towards the gradual reopening of the economy, Mojola declared that in line with the directives of Governor Babajide Sanwo-Olu, the guidelines towards reopening of the economy, especially Religious and Social centres have been developed and consultations are ongoing with all Stakeholders in partnership with the Ministry of Home Affairs and Ministry of Tourism, Arts and Culture.

He noted that upon registration, a verification process will be carried out to ensure adequate space management is put in place across the various centres to guarantee that social distancing, hygiene and safety measures are observed across all religious and social centres.