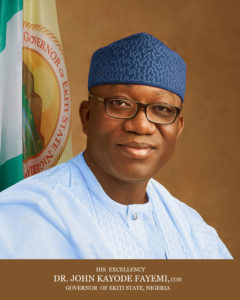 In recent years, deforestation, localised temperature rise, erosion, mining, wildfire, delayed rains, heat spikes and intense weather patterns have all increased in Ekiti, with the risk of the state now being on the frontline of the climate crisis.

Climate change has altered rainfall patterns and made unpredictable the planting and harvesting seasons that farmers rely on for staple crops such as yams or fruits, while deforestation has led to erosion, impacting local farming communities as well as increasing the risk of flooding in urban areas further downstream. This degradation of ecosystems, particularly the loss of tree cover and forests, has contributed significantly, on a global level, to greenhouse gas emissions and nature’s capacity to store carbon. 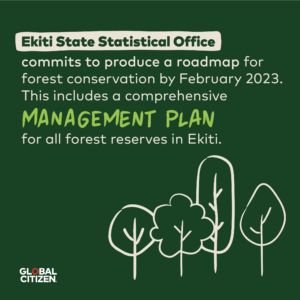 On the local level, over the last century, Nigeria has had the highest average temperature rise of any country in Africa, and that is significant because Nigeria also has one of the world’s fastest rates of deforestation, having lost over 90% of its original forest resources in the same period. Many tree species that were once common in Ekiti are now near-extinction locally.

Changes in the local weather patterns are now also affecting the health of the local population, with more people being forced into poverty, communities and families conflicted over whether they can afford to keep their last remaining patches of forest, and families facing economic insecurities.

As part of the Global Citizen Live campaign, Governor Fayemi has pledged the following to combat the climate challenges now facing the region: 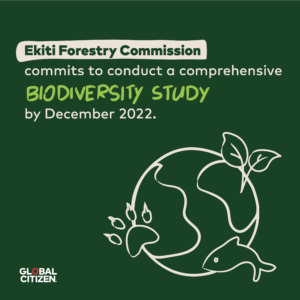 Governor Fayemi said, “Climate change can have such a life-altering effect on the socio-economic wellbeing of our people. It is therefore important for us to rise to the occasion and create an abode for all where people and nature can thrive jointly. There is undeniable proof that the wellbeing of our population is linked to better climate outcomes. “

Maimuna Maibe, Nigeria Country Director at Global Citizen, said, “The fight for our planet is one of the most important missions of our lifetime and this commitment by the Ekiti State government is another demonstration of how much we can achieve together.” “Global Citizen is proud to support the Ekiti State government in delivering the various elements of its commitment to deliver impact and value to the people of Ekiti State.”

Last September’s Global Citizen Live campaign was a month-long countdown ahead of the G20 and COP26 summits to address the pandemic, hunger, and climate challenges. The campaign saw 1.1 million actions and over 70 new announcements thanks to the efforts of many hard-working and dedicated partners. The 24-hour global broadcast and streaming event, across seven continents, included an event in Lagos, with Femi Kuti, Davido, Tiwa Savage, and Made Kuti, and saw announcements aimed at driving equitable access to COVID-19 vaccines, urgent action on climate change, and addressing the growing hunger crisis.

With its first Co-working Space, Dreams From The Slum is Making Work Easier for Ajegunle Residents