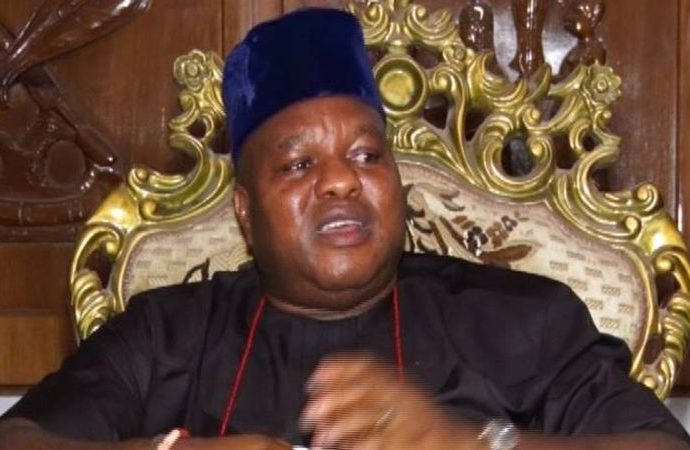 The Royal Father of Uromi Kingdom in Esan North East Local Government Area of Edo State, Anslem Eidenojie II has dragged the state government and 11 others over his suspension by Governor Adams Oshiomhole.

Oshiomhole had earlier suspended the monarch for seven days for allegedly assaulting Betty Okoebor during the September 28 governorship election in Esan North-East Local Government Area. The government had directed him to apologise to the woman within the period of the seven-day suspension or risk dethronement.

However, the state government extended the suspension to one year in a statement  signed by the Secretary to the State Government, Prof. Julius Ihonvbere on November 4.

It also stripped the monarch of all his privileges and rights as a royal father. It said that Eidenojie’s remuneration from the 5% monthly allocation to the local government shall be appropriated and donated to orphanages during the period.

Counsel to Eidenojie, Benjamin Iluobe is asking the court for general, aggravated and exemplary damages of N1 billion against the respondents jointly as a reparation for the assault, torture, arrest, detention and harassment against him in the course of their acts.

Iluobe also said that his client wants the court to declare that Oshiomhole’s action was unconstitutional, unlawful and without a just cause, adding that it amounted to recklessness and abuse of office, .

He also prayed the court for an injunction restraining the defendants by themselves, agents, servants and or privies or such other persons from oppressing him or imposing any inhibition or restrictions on his freedom of movement or agents and family in respect of this complaint.

The suspended monarch also wants the court to order the respondents to tender public apology to him in respect of the complaint.

Gov. Oshiomhole Deposes Edo Monarch over Alleged Assault on a Woman During Election