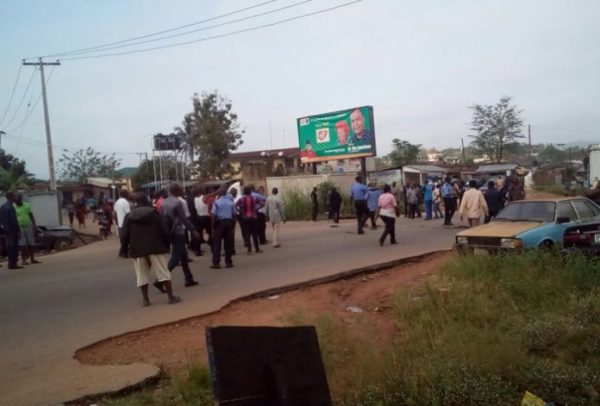 Some security agents deployed for Saturday’s governorship election in Ondo State slept in some police formations as they claimed that their allowances had not been paid.

Investigation by the News Agency of Nigeria (NAN) in Okitipupa revealed that the security agencies involved included the police, Nigeria Security and Civil Defence Corps (NSCDC) and the Department of State Security (DSS).

Some of the security agents, who spoke to NAN on condition of anonymity because of the sensitivity of the issue, claimed they slept in any available police station in the area of deployment and were unable to feed well because of unpaid allowance.

“Those that do not have relatives here slept over in the police station and we also had to make arrangement for feeding because our allowances were not paid,” one of them said.

NAN also reports that the security agents had removed all barricades and checkpoints on major highways in the area, ensuring free vehicular movement.

Efforts to speak with the Divisional Police Officer in Okitipupa, Oluwole Ojo, however, proved abortive.

But the spokesman of the Ondo State Police Command, Femi Joseph, said he was not aware of the development.

“I am not aware and I do not have the facts now because I am at INEC headquarters. I do not think any police man would contemplate leaving his duty post,’’ he had said.

Following Saturday’s complaint, some men of the Nigeria Police Force (NPF) on Monday morning protested against the non-payment of their allowance.

PUNCH reports that the policemen protested on Fagun street in Ondo town, Ondo state. The report also alleged that the officers beat up journalists and residents who wanted to take pictures.

Related Topics:#OndoDecidesOndo Governorship
Up Next

BN TV: Watch Part 1 & 2 of How to Behave as a Visitor on ‘The Ngee Show’ featuring Frank Donga