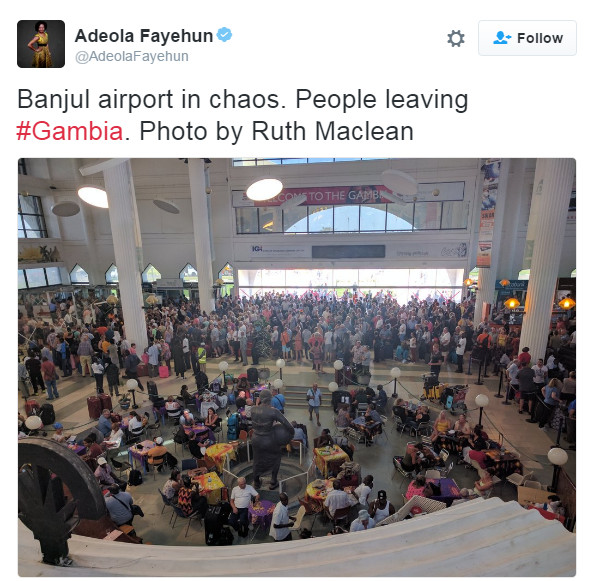 As the President of Gambia, Yahya Jammeh has refused to relinquish power to the president-elect, Adama Barrow, many citizens and residents of the West African nation are beginning to leave the country for fear of chaos, especially as Barrow’s inauguration is less than 24 hours away.

A delegation from the Economic Community of West African States (ECOWAS) had several times visited the president who had been in power for 22 years to persuade him to hand over power to Barrow, but Jammeh had declined, saying that the case must be decided by the country’s Supreme Court.

But the Supreme Court lacks judges as Jammeh had forced them to leave the country. Jammeh is now pleading with ECOWAS to facilitate the release of judges from neighbouring West African countries to hear his petition against the outcome of the election.

Jammeh said that external powers had been involved in the December 1 election that produced Barrow as the president-elect.

Jammeh had on Tuesday, also declared a 90 day State of Emergency nationwide. He had also instructed his pilot to be on standby since Wednesday morning.

U.S. had also warned Jammeh to leave the seat of power. It also announced that it will be backing ECOWAS troops who have arrived neighbouring countries in preparation to oust him.

ECOWAS and the African Union (AU) has said that it will seize to recognise Jammeh as Gambia’s president from January 19.

I Still Have Plans to Buy Arsenal – Aliko Dangote | WATCH

Boss, Remarkable Mother, Phenomenal Actor! Shaffy Bello is All of These in TW Magazine’s Latest Issue