Giuseppe Zanotti has chosen to collaborate with singer-songwriter Zayn Malik for an exclusive footwear collaboration.

The masculine line is called “Giuseppe for Zayn“, and it features two boot options, in addition to two sneaker styles, offered up in shades of green and black.

The line of shoes with Giuseppe Zanotti debuted January 3. 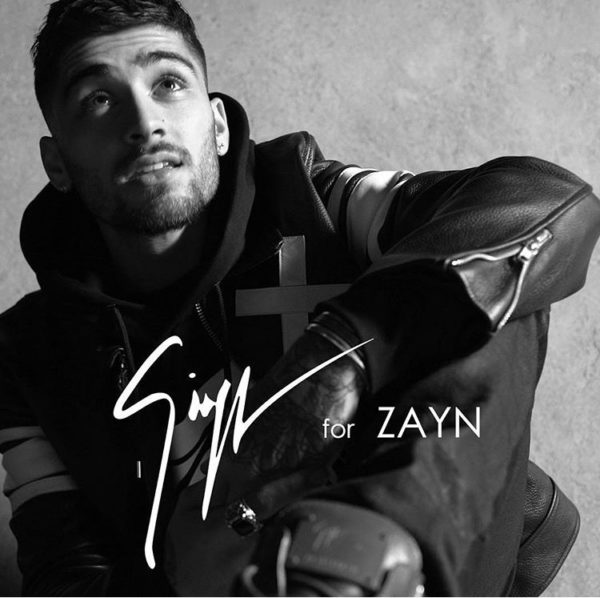 According to Giuseppe Zanotti, he thinks of Zayn as a “cool guy and an epitome of a modern rebel”. He made the statement back in Paris Fashion in 2015 when the two met. He said, “I like to work with musicians because we share a very similar vision. [Zayn and I] have always had an appreciation for one another, but it was during our first encounter in Paris that we realized we had a similar attitude and approach: iconic, edgy, and expressive. Zayn’s bold and individualistic vision, easy coolness, and love for fashion mean a lot to me.”

In an interview with Vogue, the musician said though their worlds are different they have so much in common. He said, “I like things which are a bit dark and weird, and Mr. Zanotti isn’t afraid to play with those elements either. The process of designing my collection has been really fun as a result!”

He added that “I love to design and I can’t see that suddenly stopping! Fashion, like music, reaches everyone and has turned out to be another outlet for me. I’m so excited about learning from Mr. Zanotti and his team, plus Donatella Versace and her team.”

The collection is a mix up of the iconic “rock ‘n’ roll” styles and a use of organic colours.

It’s Back! Listen to Episode 39 of “Top 12 Countdown with Cobhams Asuquo”