13 buildings, 15 vehicles & other valuables destroyed by fire in Ontisha | WATCH 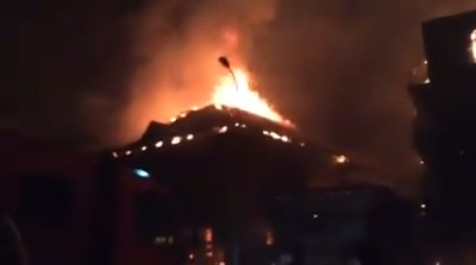 An inferno, on Wednesday night, razed down a filling station, 15 vehicles and 13 buildings along the Upper New Market Road, Onitsha, destroying property worth millions of Naira, the Police has confirmed.

The Police Public Relations Officer in the state, ASP Nkeiruka Nwode, and the Executive Director of the State Emergency Management Agency (SEMA), Dr. Paul Odenigbo, confirmed the incident to newsmen in Onitsha, Anambra on Thursday.

Nwode said that three suspected hoodlums were arrested last night during the operation to extinguish the fire.

“We only have five houses burnt; we have like 15 vehicles burnt and five Keke NAPEP and I want to thank the Almighty God that there was no life lost. We only had some people with injuries who were taken to the hospital as at the time we were here last night.”

Nwode said that some shanty houses around fueled the fire and advised the people to desist from engaging in activities that heighten disasters.

“I really want to advice the public that they should help the government to help them. Some of these shanty houses around; some of these attachments ignited the fire the more,” she said.

On his part, Odenigbo, said that the fire service responded promptly, adding that fire-fighters were called in from Asaba to assist those from Onitsha and Okpoko when they exhausted their water.

“The incident happened about 8PM when the tanker coming from Awka road, Onitsha, was negotiating the DMGS roundabout and lost control inside the Mobil Filling Station. One of the fuel dispensers later caught fire which spread down the road, destroying vehicles and buildings,” he said.

According to him, 13 houses, 10 vehicles, three tricycles and three filling stations — Mobil, MRS and Total — were affected.

Meanwhile, an eyewitness told NAN that the fire started at about 8PM when an articulated vehicle laden with fuel, fell inside Mobil filling station by DMGS Roundabout.

The eyewitness said that fuel from the tanker flowed down the road through the drain, spreading the fire.

The source said that the inferno affected parts of a popular building known as Kamo Plaza, where two banks have their offices, but caused minimal damages.

MChinelo Onyeuna, a victim and Manager of Bencash Investment Nig. Ltd., a company that deals on electronics and furniture, said she lost goods worth N100 million to the fire.

“We had so many goods worth over N100 million. Just look at our plaza, it has been burnt down completely. What I am saying is that government should stop all these people operating filling stations near residential buildings,” Onyeuna said while appealing for government assistance.

Another victim, Juana Oboli, from Onitsha, said she lost her residential building which she had laboured for 12 years to build.

Oboli, a public servant with the Nigerian Prison Service, Awka, who disclosed that she is a widow, urged the state government to help her recover from her loss.

“I struggled for more than 12 years to complete the house after I lost my husband; I want government to intervene because I don’t have anybody else to help me in this case,” Oboli appealed.

Following the fire, Governor Willie Obiano of Anambra on Thursday ordered the relocation of filling stations constructed around residential buildings and markets.

Obiano gave the order at the scene of the fire incident

The governor expressed worry over the increasing cases of fire incidents in the state.

He said that a committee would be set up to find out the remote causes of these fire incidents and what government could do differently to assist the victims.

The governor said that the committee, in collaboration with the Obi of Onitsha, Obi Alfred Achebe, would determine how the affected 15 families would be resettled around the area for a year.

Obiano also said that a barrier would be placed across the three flyovers in Awka, to restrict the movement of articulated vehicles on them.

While commending the firemen from the state and Asaba, for their timely intervention, Obiano disclosed that three special fire trucks to complement the existing ones had been ordered.

According to him, each has three components — 10, 000 litres capacity for water, 750 litres for foam and 75 kilogram for powder — which will make fire-fighting faster and more efficient.

He appealed to traditional rulers and leaders in the communities to sensitise their people on the need to reduce bush-burning, especially during the Harmattan season.

Obiano also advised people who do not have business around an inferno to run for their lives rather than stay close to take videos and pictures.

He commended the security operatives that assisted during the inferno, saying that their presence helped to stop attempts by hoodlums to loot banks.

Obiano also lauded members of the public who summoned courage to help put out the fire.

“What is left now is for us to begin the clearance of this place and I will direct our contractors and with the help of the Army, to pull out the tanker and remove the debris,” he said.