Yay! BellaNaijarians, we have been loving all your entries so far.
We go love o!

The #UnionBank100BellaNaija Valentine Season Giveaway from Union Bank and BellaNaija kicked off four days ago as we are giving TEN people N100,000 each (one person per day) for Ten Days.

Want to be a part of it? You can still put in your entry for Day Five today (click here for more information) and be on the lookout for the next five days.

Day 4 was all about love after a bad breakup and we got really interesting entries across Twitter, Facebook, Instagram and in the BellaNaija comment section. It was tough to select one winner but with a team of judges, we have selected ONE winner for Day Four.

See the winning entry from Dolapo (comment on the BellaNaija site) below.

You see how in basketball, a player is so desperate to save the ball from going out of bounds that he leaps off the court and tries to scoop the ball back into play before it touches the ground? Yeah, that! That was how she saved me. Leaped into the unknown and pulled me back from the brink before I went ‘out of bounds’.
“…Iwo, iwo nikan soso. Iwo, iwo nikan sso…” the voice of Asa floated from the speakers mounted in the ceiling of the bar as I motioned the bar keep to pour me another glass of baileys. The song in the background reminded me of two things; one is why I liked this bar, it has amazing acoustics.

The second and more important thing it reminded me of was the first time I saw her. Sitting at my table with a glass of wine in hand, I was looking around, checking out those who had come to this dinner fundraiser. My neck stopped swivelling like it had been caught in a vice. The live band was playing Asa’s Bibanke and she was dancing. Damn!!! She was moving so gracefully and her sultry black gown was swirling around her smoothly. I remember thinking, ‘how is anyone even able to dance to Bibanke that she’s able to do it so mesmerizingly?’ I would later realise that she was a great dancer. I on the other hand can’t dance to save my life…the irony!
Now I am here, in this bar trying to drown my sorrows. She was gone! I’d lost her and I still can’t come to terms with it. It’s so damn painful. She didn’t even say goodbye, she just left me hanging. I have gone through one bad breakup previously, but I yearned for that now because this one was so painful. Too painful! I remember reading somewhere that the worst breakups are not the ones vindictive, angry breakups but the ones where two people so in love have to separate because of circumstances. And that’s what happened. She left…she broke up with me by dying. It’s been over a year now yet it feels no better.
I paid my tab and stumbled out of the bar. It was raining moderately. It felt good to feel the rain on my skin, my face.
10:48pm, the luminescent hands of my wristwatch indicated. I started walking in no particular direction. I was so lost in myself that I didn’t notice the pristine white Benz that had pulled up beside me until it honked. The passenger side window slid down.
“Need a ride?” It was a casually dressed young lady. I think she may have been at the bar but, I am not really sure. I wasn’t paying much attention to anything.
I looked down into the car. “No, thank you”, I replied barely audibly and started walking again. She drove up to me and shouted through the window, “C’mon, lemme give you a ride”.
“Please, don’t worry. I’m fine”, I shook my head as I replied.
The windows rolled up and she sped ahead.
I thought she had left me alone until I saw her park at the bus stop up ahead. She got out and took something out of the trunk of her car. It was an umbrella. She opened it up and just stood there leaned on the back of her car.
I was perplexed! As I got nearer I took a good look at her. She was of average height and build, quite shapely. The curves of her hips and bosom were evident from the jeans trousers and white tees she was wearing. The rain spattered off the ground onto her white Adidas sneakers with the classic three black stripes on the side.
“Hi, I’m Elaine” she said as I got close enough, raising the umbrella to cover me as well.
“Do you make it a habit of offering strangers a ride? I chided unfairly.
“Well, I still have one person to kill tonight to meet my quota. You look like you wanna die. Why don’t we help each other out?” she said with an amused look. I felt a tiny, almost imperceptible smile on my lips.
She’d seen it too. “Oh wow, he smiles! Whoop whoop!!” she cheered.
I couldn’t fathom what was happening. And I couldn’t help but smile wider.
“What do you say we get out of this rain? Unless you wanna have a wet t-shirt contest!” she walked to the driver’s side and motioned me to join her in the car with a flick of her head.
She used her wit to bore through my defences. For the first time in a long while, I felt vulnerable. And I felt guilty. I opened the door and sat down. I heard a sound and felt something hard on the seat.
Elaine burst out laughing!! “I’m sorry”
I hadn’t realised there was a tube of moisturizer on the seat. I sat on it and it spurted all over the seat and on my backside. She rummaged through the mess on her backseat and found me a box of tissues.
“My car is a mess. Sorry. I compensate by keeping it looking tidy on the outside!” she said apologetically as I cleaned off the moisturizer as best as I could.
The rest of the night was surreal, to say the least. I kept trying to wrap my head around everything that happened since I left the bar. We exchanged numbers when she dropped me off at my apartment later that night.

I felt different when I woke up the next morning. Much like I’ve been given a new lease on life. I felt like I had something to live for again. Angela’s death had taken so much out of me that I didn’t remember what it felt to live again but something changed last night. Elaine so effortlessly made me realise that life goes on, that I could love again.
Elaine and I quickly became friends. She was an amazing person and when I looked back on that rainy night, it made sense. It’s only a special person who would go through all that trouble to give a grumpy guy a ride.
So, there I was again. In that same bar with a glass of baileys in my hands.
“To Elaine, she saved me!” I raised my glass in a toast with my closest male friends. It was my bachelor’s party! 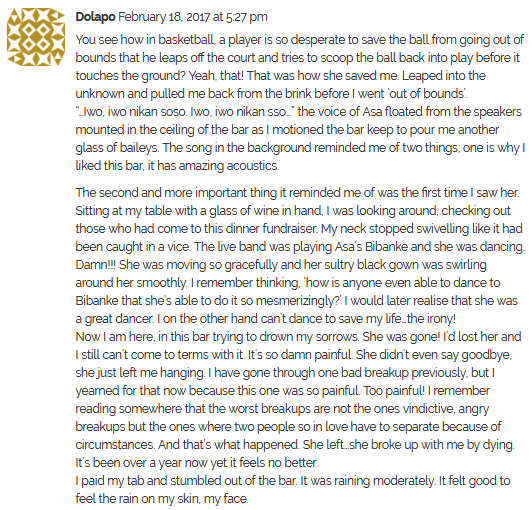 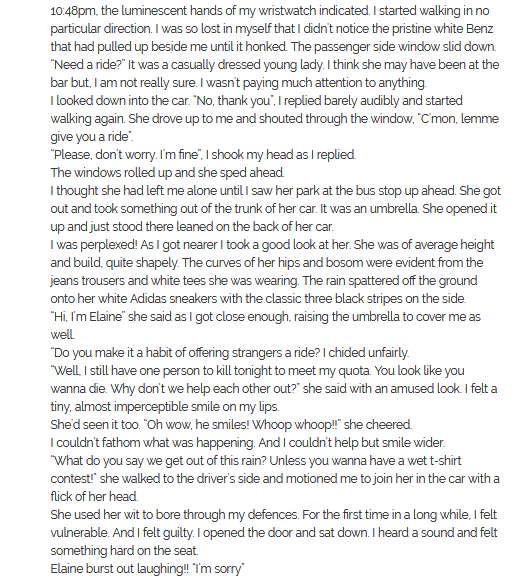 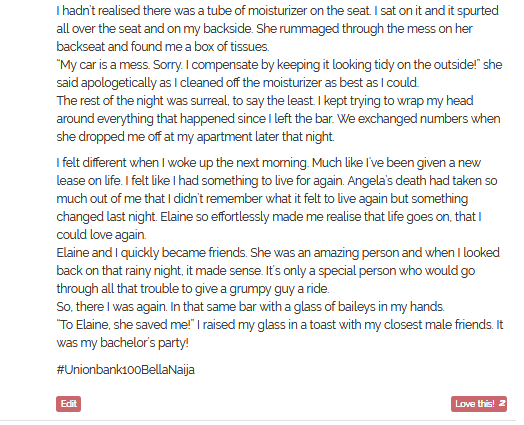 Congratulations and we’ll be in touch!
If you didn’t win, do not be discouraged, keep your entries coming!