A Facebook user Kay Lord has shared a heartbreaking story of how a man lost his wife at Federal Medical Centre (FMC).

According to the husband, after his wife was delivered of twins through Cesarean Section, she needed more blood. The husband said he had earlier paid for two or three pints of blood but it was denied her.

He said he arrived at the hospital the next morning following his wife’s call. He narrated how his wife died because the hospital staff refused to carry out blood transfusion on her until they see proof of payment.

MY STORY – By the husband of the deceased.

On Monday the 6th of March, my wife who was pregnant went for anti natal at Federal Medical Center FMC Asaba, and the Doctor who she was assign to and who has earlier confirm my wife’s Expected Date of Delivery (EDD) to be 19th March, 2017 discovered her blood pressure BP was a little above normal, then the doctor said she will be admitted so they can monitor her BP till the next day. When I came back from site, I drove to the hospital to pick my wife and she told me her doctor has said she will be admitted, I requested to see the doctor but to no avail, so she took me to the nurses who ask if I am the husband and I said yes,

They brought my wife antenatal file, took us to the pay point collected ten 10 thousand Naira from me as deposit fee and after she has paid she took us to the O and G ward were my wife was finally admitted. I called my in-law who was already in Asaba from Imo state for her first omugwor to came and stay with her daughter, but my wife objected that the hospital environment may not be conducive for the mother and that she will not be permitted to sleep inside the ward. So we stay with her till 9pm and left as the nurses were beginning to lock the doors.

On Tuesday 7th of March, i ask my inlaw to go and join my wife as I went to site very early. When I came back around 12noon, I rush to the hospital to check on my wife, I met my wife passing through a severe intense pain and her stomach was moving up and down and she was shouting I ask her what the problem was, and she said she was INDUCED. I didn’t know what it means to be induced because this is our first pregnancy, but the agony my wife was going through was beyond normal so I requested to see the Doctor all effort was futile. I was very angry, why will they do this to my wife I ask, you told me they were admitting her for BP.

Nurses were complaining that I was disturbing the ward, they also said my wife will soon deliver. I had some survey plans to produce so I left to come back later, when I came back in the evening, my wife couldn’t stand up again from the hospital bed, the pains has increased, I insisted I was going to talk with her. When she came out, she told me they INDUCED her the second time. The first INDUCTION failed and the doctor, Dr. Ojenuwa instructed she should be induced the second time. I was mad. I looked for the doctor but he was nowhere to be found. All these were done without my consent; I waited till 10pm if I could see the doctor but he never showed up so I left.

The next day Wednesday 8th of March, my in-law called me to come immediately for my wife have been booked for emergency Cesarean Section, and that the doctor is requesting for an astral pint of blood, I quickly made calls to the laboratory department who helped made the blood available before I arrive the hospital. When I got there, my wife had already been prepared and place on top of a wheel bed. They asked me to sign; I read and signed, prayed for my wife with my pastor who prayed through the phone. For more than 30 minutes, the nurses kept jesting and my wife was still in that pain, shouting on top of the wheel bed. I was worried, then I ask why the delay? No answer. I kept asking them until one man standing and talking with them got concerned and said ‘who is (this) woman?’ This woman’s issue is more critical and urgent than the person inside the theater. He then instructed that my wife should be moved into the theater while the person inside should be moved out as her case is not as serious as my wife, but the nurses refused. He continued saying that he will not leave a serious and urgent situation and start to work on an unserious one.

At that point, I notice the person talking is a doctor by name Dr. Longway, who is working under the supervision of a consultant named Dr. Maduakor who happens to be our private family doctor, Dr. Maduakor also knows the history of the pregnancy as we have also been visiting his private hospital from day one. When I got to know that Dr. Maduakor is the consultant to supervise the operation from the nurses, I was happy, I quickly called him to come that my wife is the person they were calling him for but he never came. After 20 minutes I called him the second time, he never came.

Though finally, Dr. Longway conducted the operation and it was very successful, I donated two pints of blood as we were instructed during antenatal orientations. After the surgery, my wife needed a little medical attention and support, just like every other woman in her condition, two or three pints of blood which I had earlier paid for, but was denied her by the wicked Nigeria Doctors and Nurses at Federal Medical Centre, Asaba.

The doctor on duty said they were waiting for instructions from the higher consultant Dr. Maduakor after they have informed him of the situation. The higher consultant happens to be my family doctor but was angry because we didn’t come to his private hospital for delivery. Yes, because I called him on two occasions to come help the situation but he never showed up. Therefore, the instructions never came and the junior doctors and nurses were watching my wife till she passed on.

Early morning on Thursday, 9th march my wife called me by 4.52am to come immediately so I can help her, when I got there, she was left alone as the wicked Nigeria doctors and nurses were all sitting carelessly watched her struggle with the oxygen that was fixed on her and calling for help because of her new babies  Her mother was highly restricted from entering the ward according to FMC Asaba tradition.

What is happening? I shouted, one useless nurse shouted back, are you not the husband? Go and pay for blood. My wife was shouting, heartbeat please come and help me with the oxygen she was trying to push into her nose. I was in the middle of different decision, please put blood, I pleaded, but they refuse that I should go and pay and bring receipt first. Quickly rush to pay within 7 to 10 minutes, only to come and met my wife lifeless……. So sad!

This is after she has delivered a twin; two beautiful girls the previous day. This is my present predicament. MY WIFE DID NOT DIE, MY WIFE WAS KILLED by some wicked and heartless humans who claim to be Doctors and nurses at O and G ward FMC Asaba after I have paid for everything that was needed. This is our 9th month of marriage; our wedding was on the 11th June, 2016. 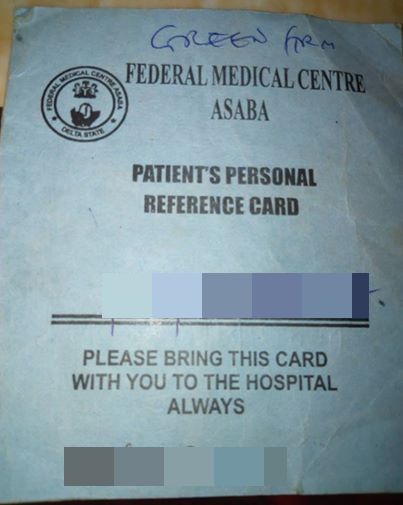 Gentle Reminder for the Weekend