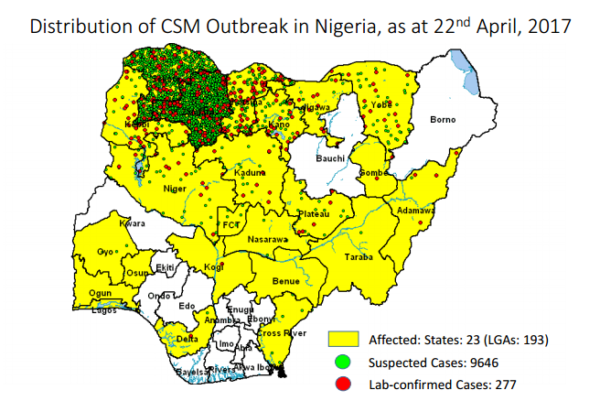 The number of new cases of suspected meningitis being reported has begun to decline as outbreak control measures take effect. the Nigeria Centre for Disease Control (NCDC) has said.

A total of 628 new cases were reported in week 16 versus 1,935 in week 15 and 2,127 in week 14. The cumulative number of suspected cases recorded in Nigeria throughout the outbreak period is now 9,646 and 839 deaths from 43 Local Government Areas in 23 states. However, only five states have at least one LGA over the outbreak threshold, down from six last week.

The Cerebrospinal Meningitis (CSM) Emergency Operations Centre (EOC) says this recent assessment is indicative of the positive impact of current national and state interventions being coordinated by the EOC. According to the Incident Manager, “…these numbers are encouraging but it is too early to celebrate. We will continue to intensify the interventions in order to ensure that we effectively control this outbreak”.

The national response has identified the need to provide technical support to all affected States in the areas of case management, epidemiology and risk communication. Support teams are currently being deployed to the most affected States of Zamfara and Sokoto to further strengthen to further support the state in its response.

A large reactive vaccination campaign, which will cover over 800,000 persons aged between 2 and 29 years commenced in Sokoto State today, (Thursday April, 27). A national support team, led by the National Primary Health Care Development Agency (NPHCDA) will be providing support to Sokoto State in order to ensure that vaccination activities are well coordinated and efficiently delivered. Partners from the World Health Organisation (WHO), the United Nations Children’s Fund (UNICEF) and others are all collaborating with NPHCDA and NCDC to provide the best possible support to Sokoto during the vaccination efforts. Teams have been mobilised to all the LGAs in Sokoto state, and people are being mobilised to turn out en masse to be vaccinated.

According to Dr. Chikwe Ihekweazu, the CEO of NCDC, “The lessons from this outbreak will inform our future response activities. This includes the need to strengthen awareness, improve clinical skills of health workers, strengthen laboratory capacities to confirm diagnosis of meningitis promptly as well as do the best we can to access the vaccines required to prevent future outbreaks.”

Looking Forward to that Big Day? Indulge in the Perfect Wedding Package at Four Points by Sheraton Lagos