My Children are far More Radical, Progressive and Fearless - Emir Sanusi tells those who think he is a Problem 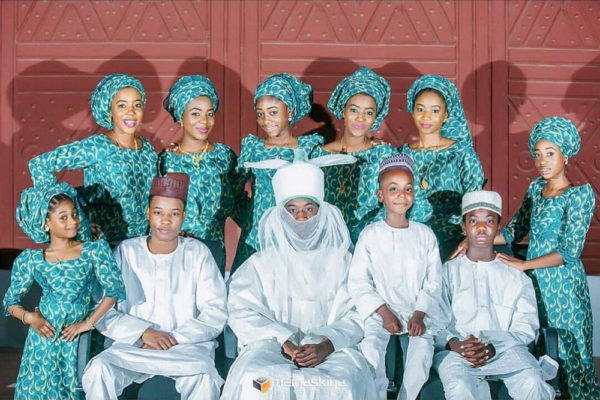 Emir of Kano Sanusi and Children

Former Central Bank of Nigeria (CBN) governor and incumbent Emir of Kano, Muhammadu Sanusi II has said that his kids are far more radical and progressive than him, adding that people who think he is troublesome will have a much bigger problem with his children.

TheCable reports that he made this known in a video message to the Bring Back Our Girls (BBOG) group at the Chibok girls’ inaugural lecture in Abuja on Friday.

“Those who are opposed to my views or think I am a problem have a much bigger problem to deal with in the next generation of the Sanusis. They are far more radical, they are far more progressive, they far more committed and they are far more fearless. So, it is time we address all these issues before these tigers come on the scene,” Sanusi said.

The monarch who was represented by his daughter Shahida Sanusi commended the group’s persistence in their demand, urging it to also extend its advocacy to women and gender issues.

Sanusi said he sent his daughter because she had demonstrated she would not take abuse from any man. The Emir said she once slapped a boy for disrespecting her.

According to Shahida, this is the first time a non-title holder or woman would represent a traditional ruler in the North.

The Emir is one who regards himself as the one who speaks the truth to power regardless of whose ox is gored.

He had on several occasions spoke out against the incumbent and past administrations and the manner in which the current administration is handling the country’s economic crisis.

He recently got in another controversy with Governor Abdulaziz Yari after the latter said fornication was responsible for the recent meningitis outbreak in Nigeria.

The Emir had also blamed slammed Northern leaders for being stuck in the 13th century, adding that the North must fix its social and religious problems if it must move forward.

Speaker Dogara “is my kid brother. He respects me and I respect him” – Governor El-Rufai