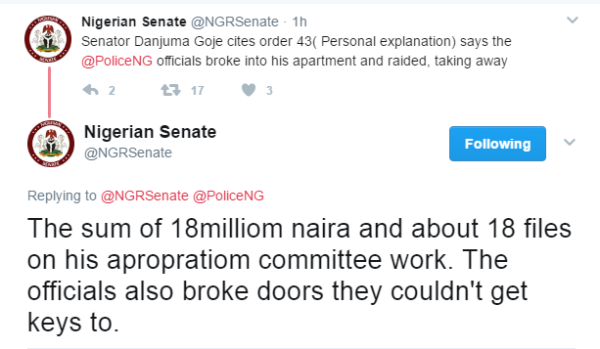 Senator Danjuma Goje, the Chairman, Senate Committee on Appropriation has said that during the raid on his house by officials of the Nigerian Police Force (NPF), documents relevant to the 2017 Budget was hijacked.

This was revealed in a series of tweets by journalist Sumner Shagari Sambo (@sumner_sambo).

Goje was quoted to have said that the police last week carted away laptops and documents that had the processed 2017 budget earlier scheduled to be laid yesterday (Tuesday).

Sen. Goje says police last week carted away laptops and documents that had the processed 2017 budget earlier scheduled to be laid yesterday.

Sen. Goje tells @NGRSenate that six files and one laptop containing documents relevant to 2017 budget, N18mn and $12,000 seized by Police.

“Police officials broke into his apartment and raided, taking away the sum of 18 million naira and about 18 files on his appropriation committee’s work. The officials also broke doors they couldn’t get keys to,” the Senate’s official Twitter handle said.

Goje, a former governor of Gombe State, is standing trial for N25bn fraud.

Related Topics:2017 BudgetDanjuma Goje
Up Next