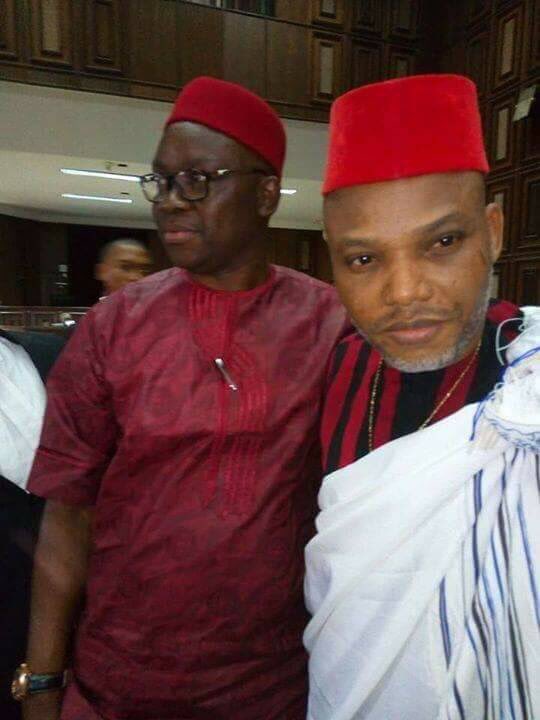 Nnamdi Kanu (right) and Ayo Fayose in court on Tuesday

Ekiti State Governor, Ayodele Fayose, has said he attended the trial of the leader of the Indigenous People of Biafra (IPOB), Nnamdi Kanu, ‎in Abuja on Tuesday because of his belief in ensuring justice for all, irrespective of where one hails from.

‎This is just as he promised to also attend the trials of former National Security Adviser, Colonel Sambo Dasuki (Rtd), and the leader of the Islamic Movement of Nigeria, Ibrahim El-Zakzaky.

Fayose stated this on Wednesday while featuring on an interview programme on African Independent Television, ‎People, Politics and Power in Abuja.

In a statement by the governor’s Chief ‎Press Secretary, Idowu Adelusi, he quoted the governor as saying he would never support a situation whereby court orders, rulings and judgments are disregarded by the government.

“The Federal Government are the ones making Kanu a hero. Anywhere in the world, agitation is normal. In the United Kingdom, there is agitation in Northern Ireland, even, United Kingdom itself is agitating in Europe. Let people agitate for whatever reason as long as it is constitutional. I am not in support of the breakup of Nigeria. But ‎when court grants bail to people, release them and allow them to attend their trials from home.

I have no personal relationship with Kanu but I have been consistent in drawing attention of Nigerians to the trend of not regarding court orders and rulings by the present Federal‎ Government. I am from the North, East, West and South of this country. I am a complete and detribalised Nigerian. I will attend the trial of Dasuki and El-Zakzaky too. Courts in the land and even ECOWAS Court directed that Dasuki be released but the government has refused to heed the call,” he said.

Asked whether he was not playing with danger by associating with ‎somebody charged with treason, Fayose said no court in the land had convicted Kanu or anybody of treason, adding that allegation would remain an allegation until a court establishes the fact.

Fayose accused the federal government of intimidating th‎e judiciary by coercing them to do government’s bidding.

“A situation whereby security agents and interested politicians would go and show statements of account of judges to them to intimidate them and force them to give rulings, orders and judgments in a particular manner is condemnable,” he added.

‎On the inability of his party, the Peoples Democratic Party (PDP) to quickly resolve its internal crisis, Fayose blamed it on the ruling All Progressives Congress (APC).

“The situation we have is that the voice is that of Jacob and the body that of Esau. It is the APC that wants the PDP dead at all cost. Let me give you an instance, when a high court in Port Harcourt, Rivers State pronounced Ahmed Makarfi the authentic National Chairman of the PDP, the APC-led Federal Government did not reopen our national secretariat in Abuja. But when Justice Okon Abang said Ali Modu Sheriff was the national chairman, they were quick to open the secretariat for Sheriff. This is a phase that will surely pass and by the time the Supreme Court decides on the matter, we will know where we are going,” he stated.

On the continuous voter registration exercise, the governor advised the Independent National Electoral Commission not to bungle it, noting that it could affect the future of the country.

He warned the opposition and INEC not to ever think of coming to rig the 2018 governorship election in Ekiti State.