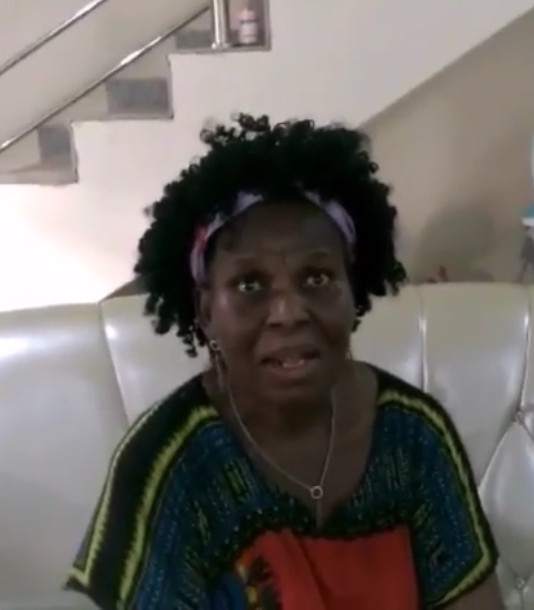 In an interview with PUNCH, Nollywood actress Tonto Dikeh‘s former nanny Mgbechi Enyinnaya has said that Tonto verbally assaulted her when she was her domestic staff.

She made the statement as a reaction to a video posted online over the weekend by another actress Halima Abubakar.

In the video, Tonto is heard in the background quizzing the nanny about a claim that she (Tonto) abandoned her at the hospital when she was sick.

See the disclaimer that accompanied the video Halima posted.

DISCLAIMER! DISCLAIMER!! DISCLAIMER!!! This is to inform the general public about the recently uploaded video about the nanny of my beloved dear son who in a video said I abandoned her at the hospital leaving her to fend for herself. It was so far-off from the truth.

She was sadly discharged from her duties 2months ago, after the realization that she wasn’t fit enough for the job as she was always suffering from one illness or another which I. Have spent Thousands treating.

So I paid her off and she went back to her base, I suddenly saw her about a week ago believing she came to say hello and leave, but begged to be taken back instead. It was obvious that my son missed her, which led me to permit her to stay for a few days.  To my suprise, she took ill again and I asked that she should be taken to the hospital, which I normally do whenever she fall sick and her on-Call Personal doctor provided By Me Isnt around. She was rushed to the hospital on Thursday 11th may 2017, and discharged on Friday 12th may 2017, telling me that she is better now. To my greatest surprise, I got a call from one of my domestic staff that she has gone to the hospital again.

Waking up today Saturday 13th may 2017, to see a video posted without  due consultations by ‘some’ foundation.

I wondered why people love cheap publicity. How can someone who left the hospital on Friday and return to the hospital be abandoned as she FALSELY claimed.

Nevertheless, I have consulted and instructed my lawyer to serve them with immediate effect for defamation of character and other of charges associated to this act(etc. Using the name of a child for soliciting for money illegally).

I am appealiing to the public and especially my fans to disregard the request of paying into the account published on the blog. It’s a scam and a malicious act that should never be allowed or encouraged.

The nanny is an ingrate for allowing her self to be used against me and my son.This is a woman who has visas to 15 different countries courtesy. Of me,Flies first class,eats 6times a day,has call card allowance, hair allowance,Has her nails taken care of by me,Gets freebies for her family and friends,takes lux.

Mgbechi has however said that Tonto verbally abused and harassed her on several occasions.

Throughout the period I worked for Tonto, she always assaulted me verbally. At the slightest opportunity, she would rain abuses on me and tell that she would scatter me if I wasn’t careful. I lived in that house with her despite all the constant harassment because of her son, King. I loved the boy like my own child and it was because of him that I stayed long with her.

Tonto said that she had taken me to 15 countries, let her show the world my passport and the copy of the visas she claimed to had obtained for me. The only place we went outside Nigeria together was Ghana and it was her husband, Churchill, that took us there.

The video she posted online was not the complete version. All the things I said, they did not show it. She only showed where she and others were intimidating me; they never allowed me to talk. Let her tell the world the truth because I worked for her diligently and had never conspired with anyone to tarnish her image,” she said.