Ahiara Diocese Crisis: Risk Being Sacked if you Don't Obey your Bishop - Pope to Nigerian Priests 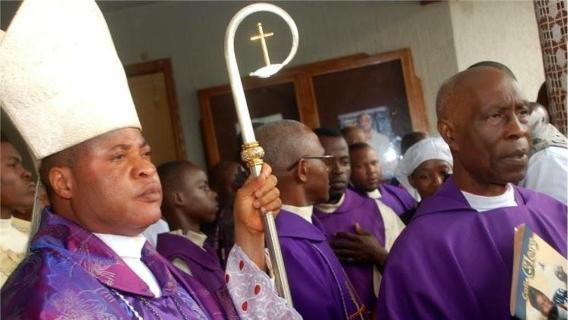 Following the refusal of some priests to accept Peter Ebere Okpaleke who was appointed the Bishop of Ahiara Diocese in Imo State by the then pontiff Benedict XVI, Pope Francis has said that all priests involved would be “ispo facto suspended” in a month if they do not obey.

NAN reports that Bishop Okpaleke, of Anambra origin had been rejected since 2012 when he was posted to the Diocese of Ahiara because he was not a native of Mbaise.

The Pope has asked all priests who have taken part in this rebellion to also write to him asking forgiveness and “clearly manifest total obedience to the pope.”

He said he’ll suspend the priests from the ministry if they didn’t pledge in a letter, by July 9, “total obedience” to him (Pope Francis) and accept Bishop Peter Okpaleke’s appointment.

The Pope met June 8 at the Vatican with a delegation from the Ahiara diocese.

“I cordially greet the Delegation and thank you for coming from Nigeria in a spirit of pilgrimage.

For me, this meeting is a consolation because I am deeply saddened by the events of the Church in Ahiara.

In fact, the Church (and excuse the wording) is like a widow for having prevented the Bishop from coming to the Diocese. Many times I have thought about the parable of the murderous tenants, of which the Gospel speaks (cf. Mt 21:33-44), that want to grasp the inheritance.

In this current situation the Diocese of Ahiara is without the bridegroom, has lost her fertility and cannot bear fruit. Whoever was opposed to Bishop Okpaleke taking possession of the Diocese wants to destroy the Church.

This is forbidden; perhaps he does not realise it, but the Church is suffering as well as the People of God within her.

The Pope cannot be indifferent. I know very well the events that have been dragging on for years and I am thankful for the attitude of great patience of the Bishop, indeed the holy patience demonstrated by him.,” the Pope had told the delegation.

Those priests opposing Okpaleke’s taking up of his office “want to destroy the church, which is not permitted,” Francis said in his address to the delegation.

He also said he wanted to suppress the whole diocese, but didn’t, so that the rank-and-file faithful are not affected.

He mentioned that tribal loyalties is not a reason to disobey orders and that the rebellious priests might have been manipulated from the outside diocese or even outside the country.

He stated that the Pope can’t be indifferent to rebellion which is why he is not going to take a conciliatory tone to resolve this dispute.