Find Out What Happens When Fools Rush Into Situations #LiterallyWhatsHot

Crime thrillers intrigue me. I like the suspense I get from flipping through pages, wondering about the next move of the involved parties and seeing how one set guards their lives while fighting for justice. 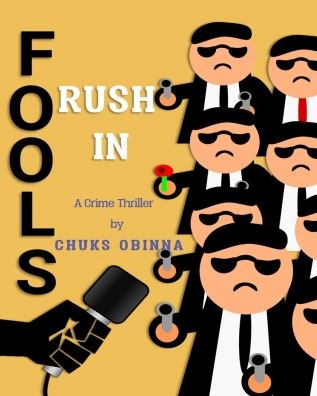 So naturally, when I stumbled on Chuks Obinna’s Fools Rush In while looking for something to read on Okadabooks and peeped that it was a crime thriller, I was curious. My first thought was that I hadn’t yet read a Nigerian author who did thrillers well, save for Tunde Leye’s The Guardians Of The Seal and that was religious, more Dan Brownesque than real crime.

Fools Rush In starts well. I like how the writer Chuks Obinna, interweaves each character’s story from seemingly independent tales to a connected conundrum of events. James and Peter, two outwardly different and inwardly even more diverse personalities meet on a bush path. Both are running for their lives: one running from a murder scene he stumbled on, the other from the possibility of getting murdered. James, the latter, is portrayed as the smarter of the two – he is an investigative reporter, fast on his feet, adequately skilled in arms, discerning enough to know when things are fishy and with a lucky streak that lets him save their lives repeatedly.

The other is Peter — wanderer, recently sacked, slightly depressed and on the verge of giving up on life. They both remind me of a fave cartoon from the past – Pinky and The Brain with Brain dropping nuggets and Pinky coming in at crucial times with his own surprising wisdom. But this isn’t a cartoon, these are real humans, and they are not intent on taking over the world. Instead, they are fighting for their lives and running from the PACK, a crime syndicate that has people in several organizations and is as secret as they come.

The plot is good. The good people, James and Peter are constantly being chased by the bad guys. Assassins and executioners are deployed and it could as well compete with any Robert Ludlum type book except that it can’t.

Like many other Nigerian crime thrillers, it is poorly written. There are errors everywhere – in grammar, in description, and in cohesion. I like the story, but the characters are forgettable. They are nondescript, like the next noun in the next sentence. Chuks gave us nothing striking about each of them. The work also felt rushed, like something from an amateur, but that was to be expected. Chuks is 20 after all.

Should we then be quick to judge and call this a bad book? No, we wouldn’t be like fools who rush into conclusions. Instead, we would download Fools Rush In on Okadabooks and praise it for what it is – a good effort where many never try. How many people the author’s age have the courage to put out anything from their imagination?

Nimide Ogbeun is a book lover, an unrepentant Coca-Cola addict and a hopeless romantic. When she’s not trying to expand her shoe closet or dreaming up the perfect getaway, she works as the Content Lead and Editor at Kamdora.
Follow her on Twitter
See her crazy pictures on Instagram
Email her at [email protected]