10 Things You Probably Did In Secondary School 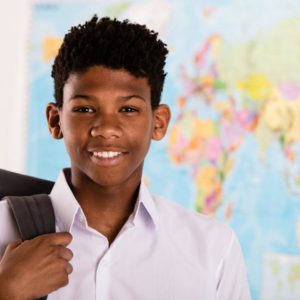 Secondary school is perhaps the most important phase of our education as Nigerians. Not only is it a sort of formative phase where we learn about life, culture, and tradition, it is also the phase where we have the most etching experiences that eventually become the memories we have.

Of course, secondary schools in Nigeria have come a long way and provides a much different (and debatably better) experience from back when some of us were in school. Looking back, it was the time when we did the most embarrassing things – things that now baffle us and even make us bow our head in shame when we think about it.

From pulling ingenious stunts – as such keeping Milo under the bed for it to get hardened and become chocolate bars, using saliva and eraser to erase ink (biro) and cooking full- meals with the pressing iron and boiling rings, to silly manoeuvres such as padding your shorts – in case you got flogged. Here are 10 things you probably did in secondary school.

Begging for food unnecessarily
In secondary school, food (no matter how surplus) remained a scarce commodity, and for some reason, food only tasted better when it came from another person’s food flask. People were ready to do and undo for as little as a spoon of rice. In fact, when it came to begging for food, there was no such thing as being a senior prefect anymore. You will find a senior begging for a taste of a junior’s food on visiting day. You also hear students make comments like: “Nkechi now! Let me just take 2 spoons of your jollof rice I will give you back.” Those who were in day school especially know the struggle of begging for water after break time. This is when the very annoying ones will now want to shine: “Go and bring your cup; if not, I can’t give you”

Hoarding and being stingy with belongings
For the stingy ones, hiding belongings was a level 5 skill. They will never admit that they have more than one pair of socks or they have an extra pen. Some will have Cornflakes, but will lie and say they don’t have, only to start forming generous when air has entered and softened the flakes so you out. They will soak Indomie under their bunk and wait till after lights out to eat it, just so they don’t share. The ones who know they can be easily bullied form the habit of publicly spitting in their food to stop people from begging them for a piece of it or taking it from them forcefully. The day students were more savage, they will be like “My mom said I cannot share my ruler with anyone, if not she will know and flog me” Really? So she is now God who is omnipresent, abi? When it came to covering their answer sheet as well, they were A star. They took hoarding to another level…hoarding their intellect by refusing to share knowledge or explain something even when it was not a test.

Blaming your fart on someone else
“Jesus! Everybody stand up! Who messed?” *silence* “I said, who spoiled the air?” *silence* “You guys think you are smart, eh? Oya, the smell is from this side… the 3 of you stand up, who among you threw the missile?” “Uncle, It’s not me, but Jide ate beans this afternoon.” And usually, the teacher would believe you…unless Jide denies it and insists someone smells your butts to know who actually did it …then you are fished out.

Writing the names of noise makers but keeping your friends off the list
Everyone who got a chance to write names of noise makers did this. Some would act obedient and keep quiet for weeks just so that the teacher would mark them and ask them to write the names of noise makers, when needed. They would now seize this opportunity to get back at all their haters while protecting the ones that considered friends or fancied. Writing names of noise makers was like sitting on the Iron Throne. The girl that refused to give you plantain chips will be the first on the list with “(X2)” written next to her name. It didn’t matter if your foes are quiet, you will find a reason to include them on the list…and you will make sure you let them know, so they can start begging. “Look at you, you are still breathing loudly, abi? Your name is already on my list”. You’ll probably hear: “Please, cancel it now, please. I will bring chocolate for you tomorrow… please”

‘Making mouth’ and then dodging the fight
Nobody – especially the boys – wanted to be called a wimp or chicken, so they tried their best to defend themselves, especially with mates. “We must fight today, after school – me and you” was a common threat. Unfortunately, after making mouth and picking a time for the fight, they would call their parents to come and take them home, or go they inflict themselves with injuries and go to the clinic for “health reasons” – so that word on the street will not be “If Bode was not sick (or if he did not injure himself ), he would have shown Ope.”

Telling unnecessary lies
“You know Tuface, that guy in Plantashun boyz, he lives on my street, he even plays football with me sometimes” “I have kissed six girls in SS1B now, don’t joke with me oh” “ My parents said they want me to travel to the UK to study after secondary school but I don’t want to go.” The lies were endless and now when you look back, you wonder why you felt the need to tell such unnecessary lies.

Kissing and fondling under the stairs
By the time you got to SS2, your innocence was a thing of history thanks to raging hormones. For the girls, you wanted to have a boyfriend; it didn’t matter if he was brilliant or not just so that you can shine in front of your friends. The guys, on the other hand, wanted to have or at least kiss and fondle a girl – whether he liked her or not. Many boys would cajole a girl then take her to empty classrooms, under the stairs or other hiding spots to share a kiss while their guys guarded the perimeter outside for incoming teachers. A number of girls also lost their lipginity (Kissing initiation) to guys they met at socials, because the boys from other schools were just hotter.

Playing stupid pranks on friends
You will put a pin on your friend’s mattress so that it will ‘chuke’ them when they lie on it, or pour oil on the floor so they can slip on it and fall. Other time, you paste stupid noted on the back of their shirt and they will be carrying it around the school. People will read and laugh at them, but they will not know why people are pointing and laughing at them. Some pranks which were for revenge would include mixing Fanta with urine and offering it to the culprit or putting catarrh on their hair.

Running errands and doing assignment for love
You have a crush on a guy so you ask him not to worry, you will copy his note for him with good handwriting so that he can get 5 over 5. Other times, you will do his assignment for him so that he does not have to stress himself. Guys, on the other hand, will do the girl’s punishment for her or even ask the teacher to flog him on her behalf. They will sneak out of the hostel to buy Agbalumo for the girl or even give her their entire provision meanwhile they will be drinking garri in the hostel…just so that they can have a footsie partner. For day school students, the boy will carry the girl’s bag from class to class, and still buy her Jamil ice cream after school…all for love.

Padding your shorts in case you get flogged
“Spare the rod and spoil the child” was one ‘commandment’ teachers took seriously, and unlike today when parents kick up a fuss over their children being flogged, parents sent notes to teachers, requesting the number of strokes their children deserved for failing to do certain things. Teachers will flog for not cutting your nails, for not doing your homework, for coming late, for wearing dirty socks, for not combing your hair…even for breathing at the same rhythm they are breathing. The girls got flogged on their palms, while the guys were flogged on their behind and legs, so a number of guys would wear double trousers or even put Dunlop inside their boxers so that the cane will bounce when they are whipped and they won’t suffer much pain.

Oreoluwa’s Maid For Me: Where Do Bad Maids Come From?

IT Specialist, Entrepreneur & Philanthropist! Lola Ekugo is our #BellaNaijaWCW this Week