Oreoluwa's Maid For Me: Where Do Bad Maids Come From? 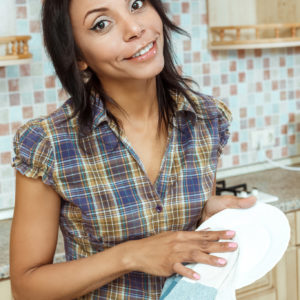 Like me, you probably have wondered at some point if there was a cabal that is behind the outsourcing of bad maids. As yorubas will say “O to bee“, meaning (It has gotten to that).

Hiring a maid in this part of the world, comes with a very big sense of caution. We anticipate the good, the bad and the ugly, and more often than not, the situation always turns out so poorly, some families hardly recover. It is for this reason that there is a wide spread idea that once you are hiring a maid, you should prepare yourself for a bad experience.

In all of these, It may surprise you to know that there are quite a number of people have had and are still enjoying their maid experiences. But as someone rightly said “It is only the planes that crash that we hear of. Nobody goes around announcing those that landed safely”.

While there isn’t a bad maid experience that is preferable, the severity differs. Some employers are tired of having to give an instruction over and over again even after three months of hiring. Some are dealing with lying and stealing; while some others have more grave situations in their hand like armed robbery and kidnap. When I hear some stories, I am sometimes tempted to think it is made up, but the sad reality is that worse things have/are still happening.

When these things happen, we are only concerned about the actions: the stealing, lying, kidnap and so on. In doing this, we neglect the root of the problem, which is most likely where the solution lies. For example, a maid who consistently lies is most likely controlled by fear; fear of the consequences she may face if she tells the truth. Mrs A, her employer who is fed up of the lies, turns to raising her voice, doling out punishments and goes as far as beating her (which is totally wrong) just to make her stop. What Mrs. A has failed to realize is that those actions only succeed in the robust feeding of her maid’s fear, and the cycle continues or even gets worse. This is why Mrs. A been hammering on the same things for a long time and nothing changes.

From experience, I have identified three root causes for the wide spread maid disasters that employers have to deal with. A knowledge of these factors will help employers handle the situations they face better.

Ignorance
Knowledge of anything is gained by education, experience, exposure to the right people and information, personal interest and involvement in the topic and reading. The kinds of maids that most families in Nigeria employ certainly do not fall into the category of people who deliberately go after knowledge. They may have some based on their little experience, but they are mostly limited.

Also as employers, we engage our minds in unhealthy assumptions and conclude that just because a maid is above 18 years old, there are certain things she should know. I have fallen victim of that and have been proven wrong many times. For example, I didn’t expect that an adult will need to be told to have her bath at night, if she has sweated all through the day. But if she doesn’t know, she just doesn’t. She will remain that way until she is taught. But like I jokingly tell employers, if your maid knew everything you wished or hoped or assumed she knew, she probably won’t be working for you. She’ll be your colleague at work. The only way to cure ignorance is to teach/train. If you think your hired help is worth the investment, you have to deliberately and strategically teach her the things that you desire that she knows. If you are able to identify the root of your maid’s actions as ignorance, start to deal with it early.

Fear
This is a common root cause as mentioned in the example above. Employers are not aware that their actions towards their maid’s fears worsens their situation. To deal with your maid’s fear, here are a few things you can do:
Ask questions. One employer told me her maid used to steal because she had worked somewhere where she was deprived of food. So she used to steal as a survival tactic, and she brought the habit to her new employer’s home.
Initiate conversations and be approachable. Ask about her well-being and the challenges she faces.  If you are constantly angry, it would be difficult for you maid to open up to you.
Forgive sometimes. Not every wrong doing deserves a grave repercussion. It is okay to overlook things.

Selfishness & Greed
This is the “demon” that many employers have to deal with. In my last article, I mentioned covetousness as part of the reason why you should switch maids. Some maids just want everything you have.

They are never satisfied with whatever you give to them no matter how big, because they feel you still have a lot more for yourself. Many times, their greed is also fueled by voices you may be unaware of; a relation who constantly calls them to find out everything you have or a thief disguised as an agent.

There is a difference between a maid who steals the little things (may be motivated by fear) and one who goes for the big things, or wants to hold you to ransom so as to force money out of you.
Unfortunately, many employers think they can talk the maids out of such character until it becomes too late. My only advise in handling a greedy maid is to end the contract.

Our goal shouldn’t be to have perfect maids, but to make them best fit for the job in our homes. Understanding what needs to, should and can be done and what not, to make that happen is what would make one’s maid experience pleasurable.