Honouring the Bro Code When You Both Want the Same Girl 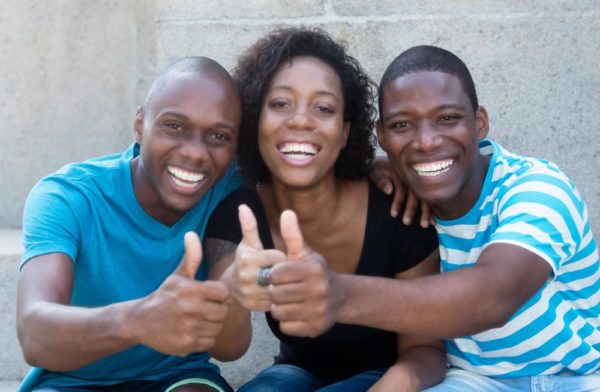 Think of the Bro Code, and picture this: Ude finally meets the girl of his dreams. She is everything: pretty, witty, strong sense of humor, a genuine believer , loves football and can sustain an intellectual conversation. He gushes about her on game night with his bro, Jide. A couple of days later, he finds out that Jide not only knows the girl, but is also very much besotted with her.

Ude and Jide, having known each other since primary school, have stuck with each other through thick and thin- they traveled to the UK to do their Masters together, came back at the same time, started a business together and even share the same apartment.
Furthermore, they worship in the same church where they each met the girl. Ude is in the Media department, while Jide is an usher. The girl in question is still attending Bible foundation classes and is hoping to join a unit in the church afterward. What do they do?

Think about this situation for a while. Very dicey, yes? What would happen if both Jide and Ude stubbornly chase after the girl? What if the girl chooses one of them? Even worse… what if the girl decides to play games with them? Unless the guys are liberal or polyamorous, chances are their friendship would suffer a lot of tension, misunderstandings, competition, and beef …which would definitely bring it to an end.

Men are egotistical beings. Many of them would prefer to give it a fight, go for the girl and lose a friend…just so they can defend their pride. A few others, however (and for the sake of the same ego), will give up the chase and leave the girl to their friend. They would rather endure their friend sweeping in and taking the girl they are interested in, than get rejected by a girl they did not have much chance winning over from the start.

The amusing and rather irritating idea of fighting over a love interest is usually attributed to women; but it is a very common occurrence amongst bros as well. It is not a teenage thing; it can happen at any age: 20s, 30s, 40s, or 50s. Also, it could be a struggle with a boss, a work colleague, a best bud or worse, a sibling. Here are some things to consider if you find yourself in this love triangle.

Talk it out with your bro
Communication can resolve almost anything. In the scenario above, where Ude gushed over the girl and Jide indicated his interest in the girl as well, it is clear that both parties are friends who can actually talk about emotional things with one another and they are each aware of the other’s intention towards the girl. In such a case, reaching a compromise is easy.

They have the following options: One person could just back down; the two could agree not to pursue her… despite her feelings or anyone’s feelings; or both could set some ground rules for pursuing the girl. That way, they do not lose their friendship in the process.

If, however, they both know that they are interested in the same girl and they are not the kind of bros who talk about such emotional ‘girly’ things, it becomes harder to resolve. Anger and resentment come in and it becomes a competition. If you find yourself this case, be the better one. Man up. Talk calmly and objectively to your friend about the situation. Go over the facts and consider important points(such as the girl’s feelings).Upon doing that, try and reach a decision you both are comfortable with. It is the only way to resolve the issue and save your friendship.

Let the girl decide
In the case where you and your friend have had a talk and none of you are willing to back down or set ground rules, the best move would be to let the girl decide on her own who she wants. This does not mean that you literally ask her to pick between the two of you. It could work, but you don’t really want to be that dramatic. It is not a movie.

When you think about it really, getting the girl has little to do with you or your bro, and everything to do with what the girl wants for herself. She will gravitate the person she prefers. Her actions will make her choice very clear. In some cases, the girl may notice the competition between the two friends and try to take advantage of it so that she can bask in all the attention. If she pretends she is not able to choose between the two as she likes them both and does not want to lose either one, she is a ‘betch’. Drop her like it’s hot. Either that or you go gangster and set a deadline for her to make a decision. The longer it stretches the more toxic it becomes.

Take the crown with humility or bow out gracefully
As expected, the girl has made a choice, and her choice is ‘you’. You are excited and feel victorious… but you have to keep that excitement to yourself and not rub it on your friends face. No shots below the belt. You don’t want to waste your beautiful friendship, simply because you got the girl and he didn’t. Rejection sucks, and guys generally do not like to lose at things. You do not want to push him to the wall.

If on the other hand, the girl chooses the other guy over you, brother just sit down. Be humble. You will be alright. Sure you will nurse a bruised ego, especially if you put in your best in the chase, but you have to keep in mind that “shit happens”. Do not be bitter and get mad at the girl or your friend…or even plot a nasty revenge. Don’t hang onto the idea that your friend took the love of your life away from you either. Be happy for them. It is the best you can do really.

Have you and your bro ever fallen for the same girl? What did you do? What do you think is the best way to handle this situation? Share your thoughts and stories.