Chioma Ozoemelam: Before You Inhale the Next Vapour from Hookah.... 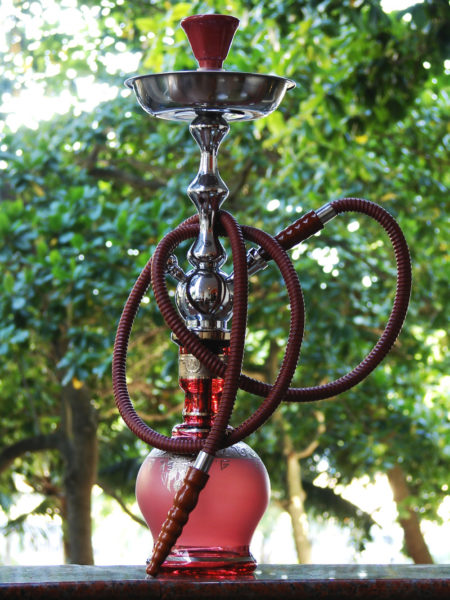 It’s almost the weekend and most of you are getting ready to hit the clubs and have a good time. A lot of you are looking forward to doing your favourite thing: blowing hookah smoke into the snapchat camera, while lip-syncing to DJ Khaled’s Wild Thoughts. Well, I have news for you and it’s not good news: Hookah smoking is dangerous to your health.

Unfortunately,a lot of people do not know how dangerous it is,as it is trending in our society.
Hookah -or as some may call it- Shisha is a single or multi-stemmed instrument for vapourizing and smoking flavoured tobacco,whose smoke is passed through a water basin before being inhaled.The tobacco is sometimes sweetened with fruits or molasses sugar,which makes the smoke more aromatic than cigarette smoke and often very appealing. There are new forms of hookah smoking called e-hookah,including hookah pens. This is why some people,p particularly young people who otherwise will not smoke cigarette, begin to smoke hookah.
Some of you are thinking “but I gave up cigarette for hookah”! Sorry, but hookah is not a safe alternative to cigarette. I will tell you why.

Hookah contains nicotine, high levels of toxic compounds, including tar,carbon monoxide, heavy metals, and cancer-causing chemicals. In fact, hookah smokers are exposed to more carbon monoxide and smoke than are cigarette smokers. Research has shown that a 60 minutes session of smoking hookah involves 200 puffs, whereas smoking cigarette involves 20 puffs; so, do the maths. All these toxic substances are delivered right into your lungs. So like cigarette smokers, hookah smokers are at risk of diseases such as: heart disease, cancer, respiratory diseases and adverse effect during pregnancy. It is also a danger to others who are exposed to the smoke emitted.

Usually, during a smoking session, up to 4 people can share the hookah mouthpiece. I really don’t know how they do it, that’s just disgusting. Further more, diseases such as oral herpes and tuberculosis can be spread from sharing.

Also, hookah smoking does nothing good for your looks – especially for those who smoke it frequently. It is really bad for aesthetics. It can cause your skin to look pale and even wrinkled. It can also cause yellow teeth and bad breath.

Finally, it is important to know that hookah is addictive. You can get hooked on hookah. Just like cigarette, it contains nicotine, which is a very addictive substance. Some people think that the water used in the pipe will absorb the nicotine, but it really doesn’t absorb all of it. So, hookah smokers are still exposed to enough nicotine to cause an addiction.

So yeah, smoking hookah is pretty dangerous. When next you go to hangout with your friends/colleagues, look for fun things to do other than smoking hookah (or anything at all).

Victor Ekwealor: #NotTooYoungToRun Bill Is Not The Solution We Seek

Dr. Monica’s Corner: Do You Have a Mental Illness?

Chioma Ozoemelam, MD is a Nigerian board-certified Physician. Her day job is at a Pediatric hospital where her patients are also her favorite type of people; children. Chioma volunteers at a cancer foundation where she gets the chance to exercise her other passion, “educating and counseling as a form of medical intervention.