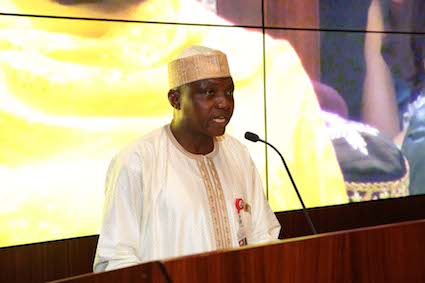 The Presidency says Governor Abdulaziz Yari of Zamfara will be leading a seven-man delegation from the Nigerian Governors’ Forum on a goodwill visit to President Muhammadu Buhari in London.

President Buhari had on Sunday in London received a delegation of All Progressives Congress (APC) which comprised national leadership of the party and its governors.

However, Garba Shehu, the Senior Special Assistant to the President on Media and Publicity, told State House correspondents that a fresh team comprising Governors of Zamfara, Ebonyi, Kano, Borno, Benue, Akwa Ibom and Oyo would be visiting the President in London on Tuesday.

Shehu briefed the correspondents alongside the President’s Special Adviser on Media and Publicity Femi Adesina and Laolu Akande, the Senior Special Assistant to the President (Office of the Vice President).

According to him, the governors will be meeting the President on Wednesday in London.

“The delegation is being led by the Governor of Zamfara, who is the chairman of the Governors’ Forum and in that delegation there will be the governors of Ebonyi, Kano, Borno, Benue, Akwa Ibom and Oyo states. They will leave tonight and make an early morning arrival in the UK,” Shehu said.