Double Standards? Another side to the Kevin Hart Adultery Scandal

While everyone is having a piece of guest-on-the-chopping-board Kevin Hart for cheating on his wife, it seems a part of the story is being glazed over, or just blatantly ignored.

A Twitter user Kia Richards has in a long (and, really, it’s a looong one) thread examined parts of the story we may have ignored because of Kevin Hart’s gender.

It is true that Kevin’s accuser has openly bragged about taking advantage of the comedian/actor while he was intoxicated.

She did say, in her own words: “Kevin Hart was so drunk and drugged up, it was an effortless attempt to film and take pictures of him.”

Now, imagine if a guy, some random guy, said this of a lady.

A lady is drunk and drugged up, and a guy films and takes photos of her while basically taking advantage of her state. What would we, the general public, say?

Or is this case different, and Kevin Hart was aware of what he was doing, conscious of his decision?

Read the thread and let us know what you think. 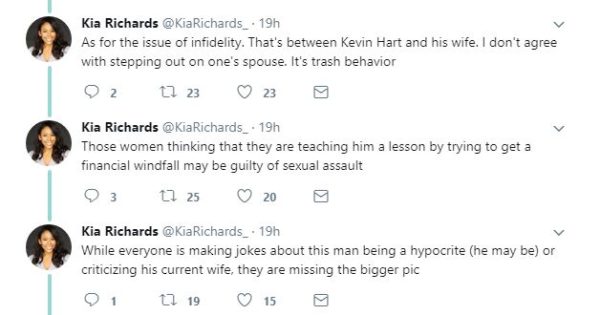 Simi’s Album “Simisola” debuts at No. 5 on Billboard World Chart!