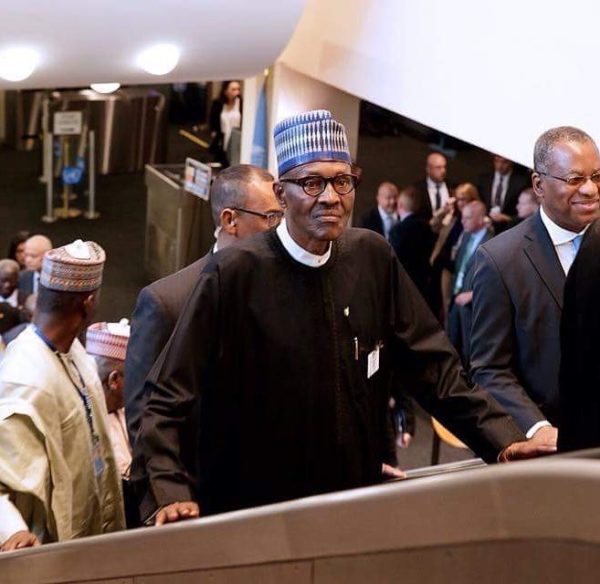 President Muhammadu Buhari was the 8th speaker scheduled to address the 72nd Session of the UN General Assembly in New York.

The Nigerian president, in his speech, congratulated the UN Secretary-General Antonio Guterres on his first General Assembly outing.

He commended the UN in settling thousands of innocent civilians caught in conflicts in Syria, Iraq & Afghanistan.

He also thanked the international community for the assistance in Sahel and Lake Chad regions to contain threats posed by Al Qaeda and Boko Haram.

On behalf of my country, Nigeria, I congratulate you Mr. President on your election and Mr. Gutteres on his first General Assembly outing as our Secretary-General. I assure you both of my country’s solidarity and cooperation. You will indeed need the cooperation of all member States as we are meeting during extra-ordinarily troubled and dangerous times. Let me also thank former Secretary-General Mr. Ban ki Moon for his service to the United Nations and wish him peaceful retirement.
Mr. President,

2. The previous year has witnessed many far-reaching developments. Some of the most significant events include the Iran Nuclear Deal, the Paris Climate Change Agreement and, of grave concern, the North Korean nuclear crisis.

3. I must also commend the UN’s role in helping to settle thousands of innocent civilians caught in the conflicts in Syria, Iraq and Afghanistan. In particular, we must collectively thank the Government of the Federal Republic of Germany under the commendable leadership of Chancellor Angela Merkel and the Governments of Italy, Greece and Turkey for assisting hundreds of thousands of refugees.

4. In an exemplary show of solidarity, the international community came together within my own region to assist the countries and communities in the Sahel and the Lake Chad regions to contain the threats posed by Al Qaida and Boko Haram.

5. We thank the Security Council for visiting the countries of the Lake Chad Basin to assess the security situation and humanitarian needs, and for pledging assistance to rebuild lives and livelihoods. Indeed, in Nigeria we are providing relief and humanitarian assistance to millions in camps and those afflicted by terrorism, drought, floods and other natural disasters.

6. In the last year, the international community came together to focus on the need for gender equality, youth empowerment, social inclusion, and the promotion of education, creativity and innovation. The frontiers of good governance, democracy including holding free and fair elections, and enthronement of the rule of law are expanding everywhere, especially in Africa.

7. Our faith in democracy remains firm and unshaken. Our regional organisation ECOWAS came together to uphold democratic principles in The Gambia – as we had done previously in Cote D’Ivoire.

8. Through our individual national efforts, state institutions are being strengthened to promote accountability, and to combat corruption and asset recovery. These can only be achieved through the international community cooperating and providing critical assistance and material support. We shall also cooperate in addressing the growing transnational crimes such as forced labour, modern day slavery, human trafficking and cybercrime.
Mr. President,
9. These cooperative efforts should be sustained. We must collectively devise strategies and mobilise the required responses to stop fleeing ISIS fighters from mutating and infiltrating into the Sahel and the Lake Chad Basin, where there are insufficient resources and response capacity is weak.

10. This will require strong UN cooperation with regional organisations, such as the African Union, in conflict prevention and management. The UN should continue to take primary leadership of the maintenance of international peace and security by providing, in a predictable and sustainable manner, adequate funding and other enablers to regional initiatives and peacekeeping operations authorized by the Security Council.

11. New conflicts should not make us lose focus on ongoing unresolved old conflicts. For example, several UN Security Council Resolutions from 1967 on the Middle East crisis remain unimplemented. Meanwhile, the suffering of the Palestinian people and the blockade of Gaza continue.

12. Additionally, we are now confronted by the desperate human rights and humanitarian situations in Yemen and most tragically in the Rakhine State of Myanmar. The Myanmar crisis is very reminiscent of what happened in Bosnia in 1995 and in Rwanda in 1994.

13. The international community cannot remain silent and not condemn the horrendous suffering caused by what, from all indications is a state-backed programme of brutal depopulation of the Rohingya inhabited areas in Myanmar on the bases of ethnicity and religion. We fully endorse the call by the Secretary-General on the Government of Myanmar to order a halt to the ongoing ethnic cleansing and ensure the safe return of the displaced Rohingya to their homes in safety and dignity.

14. In all these crises, the primary victims are the people, the most vulnerable being women and children. That is why the theme of this session: Focusing on People: Striving for Peace and Decent Life for All on a Sustainable Planet” is most apposite.

15. While the international community grapples to resolve these conflicts, we must be mindful and focus on the widening inequalities within societies, and the gap between the rich and the poor nations. These inequalities and gaps are part of the underlining root causes of competition for resources, frustration and anger leading to spiralling instability.

16. The most pressing threat to international peace and security today is the accelerated nuclear weapons development programme by North Korea. Since the Cuban missile crisis of 1962, we have never come so close to the threat of nuclear war as we have now.

17. All necessary pressure and diplomatic efforts must be brought to bear on North Korea to accept peaceful resolution of the crisis. As Hiroshima and Nagasaki painfully remind us, if we fail, the catastrophic and devastating human loss and environmental degradation cannot be imagined.
Mr. President,
18. Nigeria proposes a strong UN delegation to urgently engage the North Korean Leader. The delegation, led by the Security Council, should include members from all the regions.

19. The crisis in the Korean peninsula underscores the urgency for all member states, guided by the spirit of enthroning a safer and more peaceful world, to ratify without delay the Treaty prohibiting nuclear weapons, which will be open for signature here tomorrow.
Mr. President,

20. I end my remarks by reiterating Nigeria’s abiding commitment to the foundational principles and goals of the United Nations. Since our admission as a member state in 1960, we have always participated in all efforts to bring about global peace, security and development. Nigeria will continue to support the UN in all its efforts, including the attainment of the 2030 Agenda for Sustainable Development.
I thank you.