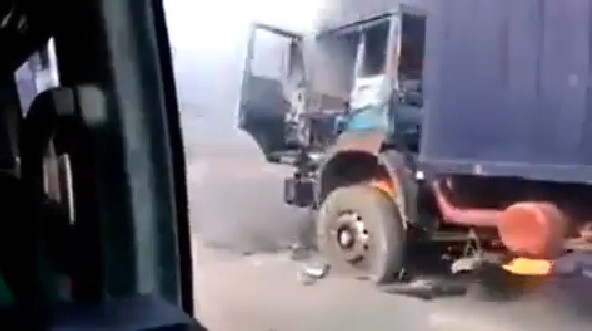 Suspected members of the Indigenous People of Biafra (IPOB) are seen in this video searching for Hausas in Aba, a city in Abia state. At least one trailer was burnt, as seen in the video.

The suspected IPOB supporters, with clubs and machetes, were seen searching commercial vehicles for Hausas.

This is a call to all authorities to nip this in the bud before it becomes more serious and dangerous.

There is an ongoing military operation in the South East titled Exercise Egwu Eke II, also known as Python Dance, and it is aimed at exercising the troops of 82 Division, to enhance their proficiency in internal security duties, according to Brig.-Gen. Sani Usman, the spokesperson of the Nigerian Army.

Usman said that the operation is also to address to security challenges of kidnapping, armed robbery, that are associated with the ember-period in that particular region.

The bit does raise the question that: Are cases of kidnapping the responsibility of the army’s or the police?

Similar exercises have taken place within the North West and North Central parts of the country in April this year, the General added.

Suspected IPOB members seen in this video searching for Hausas in Aba. At least one trailer burnt. Yesterday, suspected Army officers were seen torturing men suspected to be IPOB members. This is a call to all authorities to nip this in the bud before it becomes more serious and dangerous. #PrayForNigeria #GodBlessNigeria

Larry King reveals he was diagnosed with Lung Cancer