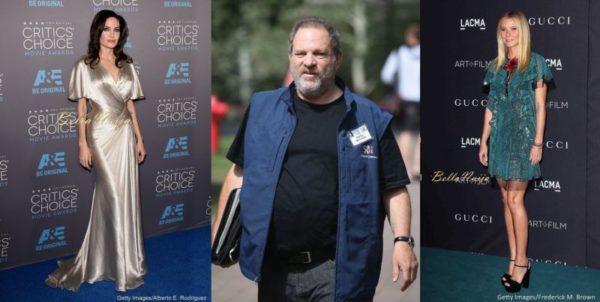 Oscar winners Angelina Jolie and Gwyneth Paltrow have come forward with reports that they were also harassed by troubled producer Harvey Weinstein.

The two actresses, like all the other actresses, say it happened in their youth, earlier in their careers, the New York Times reports.

Paltrow was 22 when – like all the other actresses – Weinstein invited her for a private meeting.

She had been hired by him as the lead in the Jane Austen adaptation “Emma.”

He had invited her over to his suite at the Peninsula Beverly Hills hotel for a work meeting, and it had began uneventfully.

The meeting ended with him placing his palm on her thighs and suggesting that they head into the room for massages.

She refused, she said. “I was a kid, I was signed up, I was petrified.”

She confided in her boyfriend at the time, Brad Pitt, who approached Weinstein and told him off, saying he should never touch her again.

Weinstein and Paltrow had had a close working relationship before then, and she had seen him as her mentor.

After Pitt told him off, their relationship turned professional again, but not before he berated her, asking her never to reveal the harassment to anyone else.

“He screamed at me for a long time,” she said, and she was afraid she would lose her role in “Emma.” “It was brutal,” she added.

She continued working with Weinstein, and won the Best Actress Oscar for her role in his movie “Shakespeare in Love.”

Jolie said Weinstein made advances on her in a hotel room, and she shut him down.

In a mail to the New York Times, she wrote:

I had a bad experience with Harvey Weinstein in my youth, and as a result, chose never to work with him again and warn others when they did.

This behavior towards women in any field, any country is unacceptable.

The New York Times had reported several cases of sexual harassment against the producer, with at least 8 financial settlements made.

The New Yorker, on Tuesday, in a 10-month investigation, discovered 13 women whom Weinstein had harassed sexually, and in 3 cases raped, between the 1990s and 2015.