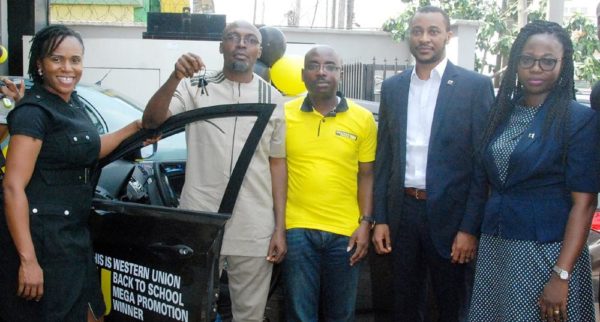 According to Patrick, “I have been a long time customer of Diamond bank and Western Union. When I was initially contacted and informed that I had won a new car, I couldn’t believe it. It didn’t make sense to me. I thought it was a scam, until last Friday, when I saw the car at the official presentation ceremony.  I am very grateful to Diamond Bank and Western Union for this reward,”

Head, Consumer Channels, Diamond Bank Plc, Chekwube Ohaeri, told pressmen that the services of Western Union at Diamond bank are opened to both account and non-account holders of the bank. She revealed that Diamond Bank have been in partnership with Western Union for close to 15 years and that the relationship has indeed been a fruitful and rewarding partnership.

She added that the emergence of a customer of Diamond Bank Awolowo road Ikoyi branch as winner of the star prize is not only good publicity for the bank, but has also improve the visibility of the Western Union brand, and ultimately lead to more referrals to use the service.

“The next draw is the ‘Year End Promotion’ and we are optimistic that more customers of Diamond Bank will eventually go home with one, and possibly the 2 cars that are up for grabs. Ohaeri said

The “Western Union Back to School Mega Promotion” started July this year with customers rewarded with 2 cars. To qualify for the promo, consumers must send money overseas via Western Union just once irrespective of the amount.

Get a Free Pass to the Africa Beauty Queen International Pageant! Simply send a TEXT to get a FREE Pass | Saturday, Nov. 18th

Keeping up with Nigeria’s Rep Stephanie Agbasi at #MissUniverse2017!