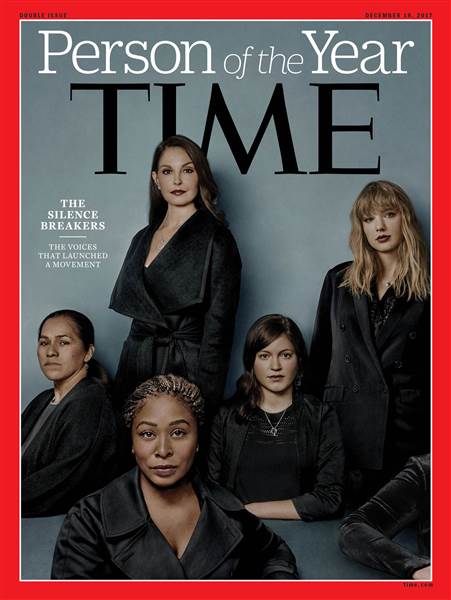 “The Silence Breakers,” the people who spoke out after suffering sexual abuse and harassment, have been named as TIME’s 2017 “Person of the Year.”

The decision was revealed, along with the magazine’s cover, by TIME’s editor-in-chief Edward Felsenthal on Wednesday on TODAY.

“The galvanizing actions of the women on our cover … along with those of hundreds of others, and of many men as well, have unleashed one of the highest-velocity shifts in our culture since the 1960s,” Felsenthal said.

The women, and men, made revelations that caused a ripple in several industries, including Hollywood, music, and tech.

Harvey Weinstein, Kevin Spacey, journalist Charlie Rose, comedian Louis CK, are just some of the high profile people who have been implicated in the sexual harassment and abuse claims.

Donald Trump, who had earlier claimed he “took a pass” on being named “Person of the Year” took second place, with Chinese President Xi Jinping and Robert Mueller, the special counsel probing the Trump campaign’s possible ties to Russia, North Korean leader Kim Jong-un, former NFL quarterback Colin Kaepernick, all featured on the shortlist released on Tuesday, rounding up the top 6.