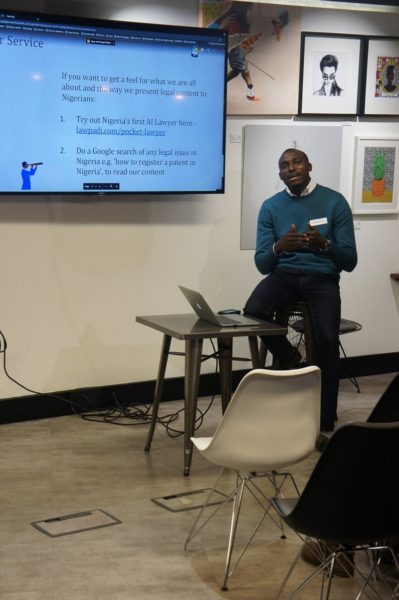 BellaNaija is happy to introduce a new feature in conjunction with Building Things for NG (BTNG). The BTNG interviews are conducted by a regular BN Contributor, Papa Olabode.

Kicking off the series, Papa chats with Babatunde Ibidapo-Obe of LawPàdí (another BN Contributor). We hope you enjoy reading this as much as we did.
***
Babatunde, the founder of LawPàdí, is a lawyer. Now, anybody who knows me, knows I love talking but if there was ever a ‘talking Olympics’, I can guarantee – Tunde would win – hands down. But, the great thing about Tunde, he’s not only good at talking, but he also happens to be a wise man. One who’s able to talk about diverse topics; for example, moving flawlessly from talking about challenges of bringing law to Nigerians, to talking passionately about social injustice.

It’s no coincidence that I’ve always wanted to get Tunde to speak at length to the BTNG community, but, due to scheduling conflicts (he spends a great deal of time in Nigeria running his startup and juggling a PhD. in Procurement Law from the University of Sussex), the timing hasn’t been quite right. Until October 12th, where the stars aligned, and he was able to do so. We booked this interview in shortly after.

We met at The Folly’s Fenchurch St London for what turned out to be a pleasant boozy lunchtime interview (the things I do for my readers sake ?). Below is an edited summary of our conversation. Enjoy.

Who is Babatunde Ibidapo Obe?
I’m a born and bred Lagosian. I’ve lived in Lagos most of my life. I studied law at the University of Lagos and later got qualified as a lawyer in Nigeria. I worked for a while with the Lagos law firm Aluko & Oyebode before deciding in 2010, to study for a Masters in Computer and Communications Law at Queen Mary, University of London. After completion of my Masters, I decided to stay in the U.K to work at a legal services company for about four years, and I then decided to move back to Nigeria to start LawPàdí.

Why did you decide to start LawPàdí?
Well, any Lagosian can testify that there’s a certain level of lawlessness that comes with living in Lagos. However, my time in the U.K showed me the discrepancy between the rule of law in operation in the two societies. My first-hand experience of apathy to law and subsequently, the proper functioning rule of law is critical about how and why we founded LawPàdí.
Also, as a practising lawyer, I’ve always had people asking me the same legal questions; over and over again. Sometimes, it was almost like being a walking free legal advisory service. And then I thought: there must even be more people with these same concerns and questions.

LawPàdí started as a platform to provide free legal information to Nigerians. Our goal is to educate the average Nigerian about their rights and duties by giving clear and easy to understand answers to questions about the law and how it affects their daily lives.

We cut through the legal jargon and get to the crux of the issue for laypersons to easily understand. In a nutshell, what we are doing is coming up with content and tech applications that provide well-researched legal information in quick, clear, and concise words to Nigerians on everyday legal issues they face.

I think Law Tech is a promising phenomenon in Nigeria. Especially those focused on consumers as end-users since there’s a massive gap in that sector. But the thing is, do people care, or appreciate the importance of law, and more importantly, are they able to pay for it?
That’s an excellent question, and from my perspective, I’ve worked on both sides – those that can pay and those that can’t. Previously, close to four years ago I created a software called Ampersand for law firms and lawyers. The users felt it was useful technology as usability was straightforward and it just worked as advertised.

However, we struggled to sell the software.

Ampersand helped in the drafting process such as the drafting of court documents. It made the process faster and improved accuracy. Unfortunately, we discovered that Law firms don’t have the problem of trying to get their drafting cheaper. Human labour is quite affordable in our parts of the world – and this includes law talent (unfortunately the average lawyer in Nigeria isn’t very well paid compared to other professions).

From a money-making perspective, it was firstly a passion project. With secondary objective that it’s self-sustaining to ensure we reach as many people as possible.

Speaking of passion, I heard you speak at BTNG, you touched on why the law is such a passionate mission as you’ve seen injustice on a personal level. Can you elaborate on that?
Deciding to work on any business or long-term project, it’s important that whatever you’re doing puts food on the table, but it’s also important to have a passion.

For me, my passion for the LawPàdí project is borne out of an innocuous personal experience when I was much younger. I loved reading novels, and I used to read everything from Stephen King to Jeffrey Archer, and to John Grisham. Anyway, I read this John Grisham novel – The Rainmaker. The premise of the book was a lawyer’s fight to get justice for the family of a dead boy (who died from Leukemia) who had been refused health care by his insurance provider unlawfully. It was the classic David v Goliath story, and it shaped my view of what the law should be about – helping the less privileged people. Less privileged not necessarily meaning people who are poor, but more generally people who are at a disadvantage.

And if you boil it down to the basics that’s what we try to do with LawPàdí…level the playing field by giving everyone essential access to legal information. I wish we could do more, but at the moment that’s all our resources permit us to do. In lots of cases, we might not be able to fight for victims of injustice, but instead, we provide information so they can fight for themselves.

Going back to LawPàdí, you talked about the first Legal Bot in Nigeria (maybe even Africa) – your legal assistant Automated Divorce Advisor (ADA), can you share some practical tips on how this works?
One of the critical things for us is finding practical ways to help people. In that vein, we looked into the data that we’ve generated over 2 and a half years of questions asked on our platform to create a solution.

What we noticed is that a high percentage of people coming to our platform, visited to get divorce advice. As you might know, to some extent, divorce is seen as a taboo in our society. Hence, people are careful about how they discuss it. In a lot of cases, they feel more comfortable talking to people outside their network. And for most people, no one within their network has the right legal expertise, so they need to reach out as well.

To make matters more complicated, to get a divorce in Nigeria, there are certain things you need to prove and requirements based on your circumstances to be deemed ‘eligible’ for divorce.

The ‘eligibility’ puzzle is why we created ADA as our first Chatbots to guide people through the divorce process.
ADA helps anonymity. For instance, you’re able to provide a pseudonym and provide all the relevant information so that you get the right advice right instantly. There’s no need to wait for email or text which could come in at the wrong time (e.g. a spouse is with the phone), this could lead to some serious issues.

What ADA does is to ask you a series of questions, and based on the relevant laws of Nigeria, it will let you know if you’re eligible to get a divorce in Nigeria based on your circumstances.

At LawPàdí, we had about 300 articles on different areas of law in Nigerians. Chances are whatever issue you have has been answered, and if we don’t have it you can use the free service we have, and we will answer the question within 24-48 hours. We use data to drive the content and applications that we create. And there are more chatbots like ADA in the pipeline. Many more.

There are advocacy groups like Stand to End Rape, and BudgIT doing excellent work informing and educating citizens. However, at the core of it, the law can only be moved forward in a meaningful way by a government that values the importance of having a free and fair legal society.

Are all law tech firms in Nigeria not going to run into this infrastructure stumbling block? Or you’re trying to work around it?
There’s a misconception that the laws don’t exist in Nigeria, they do. The laws exist in some areas. We have the relevant statutes, and in some cases, they work.

I will provide an example of substandard goods. If you buy something in shops and you go home to discover it’s defective. You can take it to the store, and if they refuse to accept it. You have avenues for redress.

There’s an organisation called the Consumer Protection Council (CPC) which was set-up in 1999 that helps you fight your case. Anyone can reach out to them – even on social media platforms, and they will assist you. CPC is not a new organisation, and they don’t rely on new laws to carry out their mandate – they actually rely on a law passed in 1992. I’ve met some of the leaders of the CPC and know how hard they work.

Same as contracts, if you lend someone 3 million Naira, and you’re not paid. As long as you have documentation, and follow protocol for default (for instance you need a letter of demand), you can take them to court. And the court will grant you judgment, and can order that they execute the judgment against the person’s bank account, it’s something called a Garnishee order.

Does the law work 100%? No. But it does exist. There one’s thing to try to go through the process, and it doesn’t work. And it’s another thing to do nothing because you feel that the laws are not there.

The system exists, and the system works sometimes.

To wrap up, if not law, what will you be doing?
If not Law, marketing or advertising. This has nothing with watching the show, Mad Men. I always find the creative process very interesting. I like the sound of advertising or marketing as they’re one of the creative industries out of there.