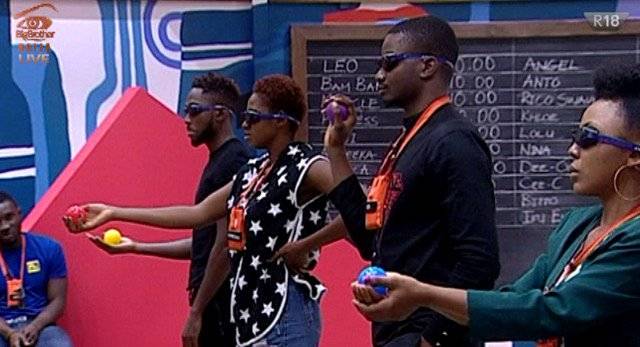 Did you watch day 28 of the Big Brother Naija 3 reality show?

Having binged at the party last night, some of the Housemates confessed their feelings when the alcohol finally settled in its emotional corner.

It’s has finally come to the clear that the relationship between Cee-C and Tobi is that of a mutual friendship and nothing more. This was confirmed by both parties when they were telling BamBam why they thought the relationship didn’t work.

Tobi fired shots first saying that Cee-C was in love with the ‘sadder’ version and not him in totality but he has now chosen to be him and whoever likes him or not is not his problem. He further added that if he continues being with her, it will mean that he’s only in the House to support her game.

Cee-C then fired back saying that she’s seen what Tobi has to offer and it’s not enough. She then mentioned how Tobi’s strategy to probably hook up with the hottest girl in House has worked for him. She further added that she tolerated a lot of things in the House but she sees Tobi as a distinct young boy.

Cry Me a River

On the other side of the House, Alex flooded her pillow with tears. She was sad that she felt Leo didn’t like her the way she does. She told anyone who cared to listen, but all the advice she received was to just forget about Leo and move on. Cee-C told her that Leo cares for her and that she might have interpreted his kindness wrongly while Tobi said Leo would be stupid not to see that she like him. At the end of the day, the pair both ironed the issues and Leo made it clear that he doesn’t like her the way she likes him.

Was the message clear enough or did it fall on deaf ears? Only time will tell.

What’s a Girl to Do

Leolex first breakdown hit all like a brick of ton. No one in the House saw the lightning speed blow that Leo inflicted upon Alex. It all started out very casually, when Biggie paired the discreet Leo with the bubbly Alex during the first week.  Despite radically different personalities, Leo being the hands-off guy and Alex being of the life of the party kind of a girl, these two had found their own ways to perfectly blend in. They seemed to have their own silent language: just one look was enough for one to understand another.  Unlike other pairs in the House, Leolex looked like a solid combination of camaraderie, care and consistency.

How to Lose A Girl

Earlier Leo had been the first to confess that he knew Alex had a soft spot for him, and that she liked him a lot.  At the time he called Alex too young and fragile for him to toy with.  Yet despite being unpaired and having formed new partnerships, whenever Alex was in need, like when she was tending to the twin dolls, Leo flew to her rescue within a split second. She didn’t have to utter a word for him to sense what she was going through.

Alex on another hand has always been herself, never trying to play any game on anyone. No one in the House is immune to her hugs, which may explain why she has been criticized for having no concept of private space. In Leo, Alex found a confidante, a friend with whom to laugh and cry. They walked the same stride, shared the same food and same bed. It was inevitable that these two were bound to lock lips, like they did. At bedtime, Alex straddled Leo and started caressing his face, before pulling the duvet as they engaged in a long deep kiss away from prying eyes. Well their activity caught Ifu Ennada’s attentions who cheekily pulled the duvet off them.

Tears of A Woman

Out of the blue, Leo later told Alex that girls are not real, and that he was displeased with her behaviour, which made Alex burst into tears. After all he had returned her kiss, and Alex was hurt and crying so much that even Cee-C came close to comfort her. What’s more unusual was to hear Cee-C who only talks about herself give her a piece of advice. Still Leo said he didn’t mind sharing a bed with Alex.

Do you think he was leading her on?

While preparing for tonight’s live show, Rico Swavey and Ifu Ennada sat aside in the unusually quiet lounge. Rico needed to open up to someone and explained that he missed making music, and could not give his best performance during the Task presentation for he had not received sufficient time to rehearse his lyrics.

This Is How We Do It

For Rico Swavey, life was a soundtrack on which as a composer he posed his lyrics on. But he was also aware that there was more to his life than music. He said his appetite for diversifying his activities may distract him from his primary passion. He also shared with Ifu that earlier in life he had lost all of his music stored on a computer that was stolen. Rico has since learned the art of better planning every move of his career, something Ifu strongly agreed with.

Recollecting her early career wins, Ifu regretted not having carefully planned for success. She noted with regrets that not having a plan in place for her first earnings considerably delayed her. She said that passion was not enough and that having the strengths to try again after setbacks was the key to satisfaction. Looking back, Ifu wished she had a clear plan on how to make the most of the hard-earned money instead of squandering it uselessly.

From their chat, Rico and Ifu came closer as they both realized that they were cut in the same hustler material, and had the unshakable resilience that helped them always bounce back.

Have your Cake and eat it

The Week That Was

Besides the daunting and unarguably upsetting pair reshuffles, the Housemates had their plates full and calabashes overflowing this past week, form having their sleep stolen by wailing baby dolls to actually tending to big babies and having to prepare their Safe sex Task pieces, there was absolutely no room for slacking, or so we think. Despite not having been completely invested in their Tasks, the Housemates managed to bag an undeserved Wager win and judging by their reactions, they didn’t expect Miracle to lead them to victory.

Speaking of victory, the reigning HoH managed to blow pepper powder in the faces of his adversaries and walked away the ultimate Friday night game winner; tallying his total wins to three. Kudos to him. In roller coaster news, Tobi And Cee-C made headlines ounce again with their on again and off again puppy love. This time however, Tobi seemed to be in the driver’s seat while Cee-C chased the keke breathlessly. Alex and Leo’s ‘somethingship’ made front page news too; with Alex crying us a river because of Leo’s cold shoulder. Drama much?

Cheers to The Faves

Another highlight to the week was the Nomination twist. Instead of the normal ‘choose who leaves’ drill, Biggie had the Housemates vote for their favourite pairs and surprisingly or not, Tena (Teddy A and Nina) came out as the average faves with 4 votes. It’s quite difficult to say whether the pair owes this result to Teddy A’s charms or Nina’s softness; go figure. This turn of events seems to be the universe’s way of patting Tena on the shoulder for their good deeds and is an undeniable game changer.

As reward for their meritorious existence in the House, Tena has bagged themselves relief coated immunity amongst other things. This means there is no getting rid of them for another week. The looks on their faces after Biggies announced that they’d be excused from the HoH qualifiers gave them away so much so that we could smell their fear through the TV screens.  To add joy to an already overflowing cup, Biggie mentioned that Tena was allowed to Nominate other Housemates but could not be nominated. Oh sweet sweet victory.

The tension scales tell us that the Game is getting harder and harder, with Housemates wavering in the unknown. How the backstabbing continues lies in the precious palms of time.

Biggie’s new tradition of hosting HoH qualifiers before the main event and after tense Eviction ceremonies sure has the Housemates both excited and terrified at the same time. Tonight was no different. Carried by their anxiety, the pairs drifted along and prepared themselves for the qualifiers. Biggie brought up his inner softie and had the Housemates treasure hunt, or should we say feather hunt. The challenge entailed digging through a bucket filled with white feathers to find the one yellow painted feather and deposit it into a basket across the arena floor. With Tena (Teddy A and Nina) out of the way, the rest of the pairs were ready to bring it.

It looks like Mito (Miracle and Anto) have no faults according to the stars. After three consecutive victories, first as HoH, bagging the Wager and thirdly, swimming while other sank during the Friday Night Games, Miracle’s lucky star seems to be outshining those of others and to complete the puzzle, Anto followed the blazing winner’s trail and qualified for the HoH challenge.

See destiny ehh? So, lovebirds Tobi and Cee-C also managed to pull themselves through and qualify for the big boss chair. It’s an interesting twist to things as both have had a slice of the sweet immunity serve and know how it feels to walk on air. The former Cebi constituents now halves of Tolex (Tobi and Alex) and Ceelo (Cee-C and Lolu) searched for their lives and as if their buckets conspired and pushed the golden feathers up for them to quickly retrieve, they claimed victory.

The two ladies definitely have their work multiplied as both have played sidekick to actual HoH’s and not having won a single challenge individually, they certainly have points to prove. On the other hand, the guys have theirs cut out for them as they’ve both lifted the trophy before and winning tomorrow’s challenge will.