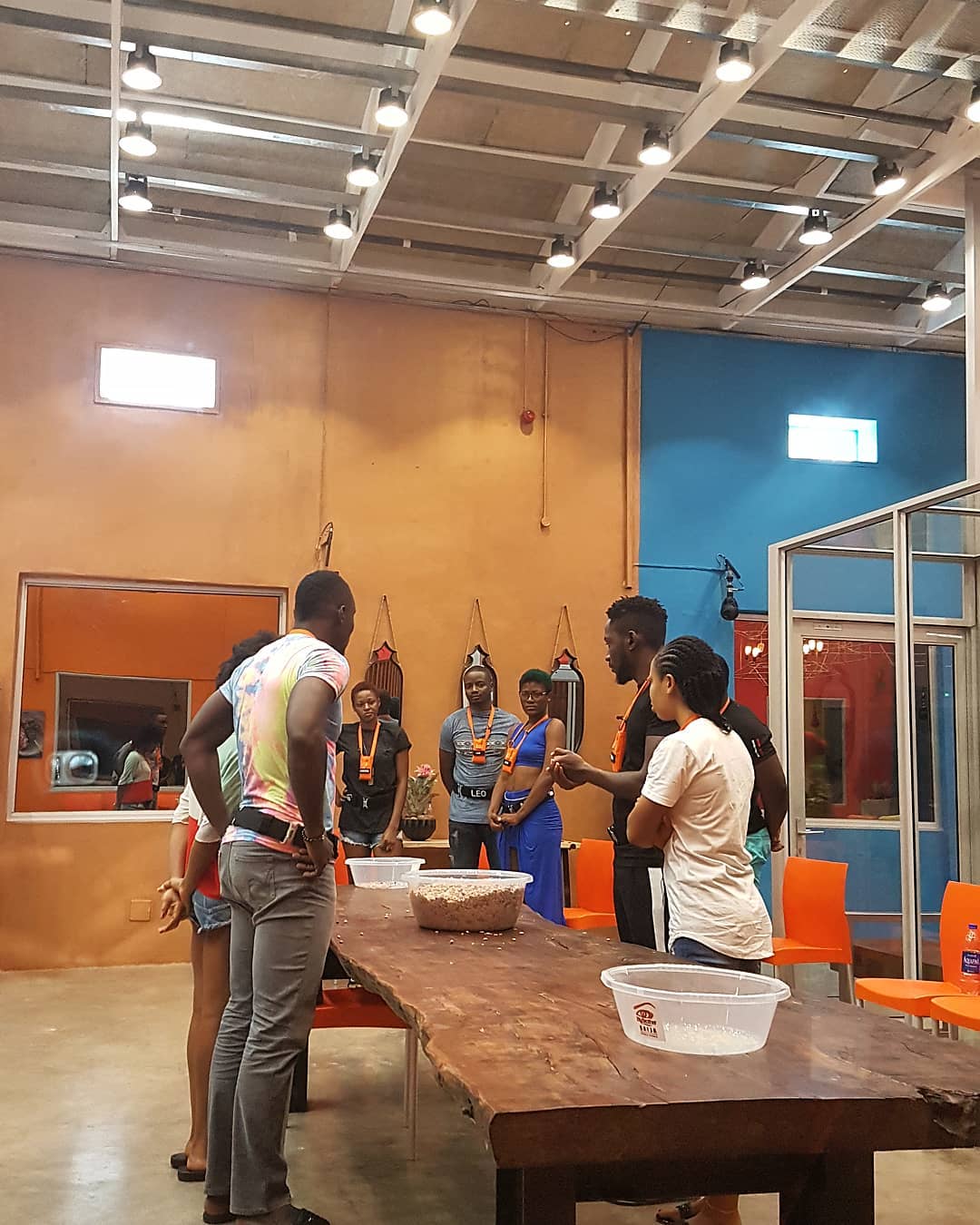 Did you watch day 5 of the Big Brother Naija 3 reality show?

This glorious morning saw most of the Housemates (excluding Bitto, K.Brule and DeeOne) making the most of their groove-packed, high intensity dance work out. The morning bump and grind left everyone feeling high off all the endorphins which was much needed following the ups and downs of last night.

In the wake of losing the Task Presentation, the Housemates had a brief discussion in pocketed groups about how they need to be better. Not much seems to keep the Housemates down however, as they were back in high spirits in no time.

BamTeddy (Bambam and Teddy A) spoke about their dreams for their future. Teddy A seemed to be listening attentively but one couldn’t help wonder if he was truly engaged or playing the game. In his Diary Session, he told Big Brother that Bambam was the type of the girl who liked to be listened to.

K_Square (Khloe and K.Brule) had quite an intimate moment as the pair connected over pillow talk. It was quite evident that K.Brule, the self-confessed lover of love, hoped that him and Khloe would be more than just a strategic pair but Khloe made sure to keep him in the friendzone.

Tobi and Cee-C, are glued to the hip. They moved their conversation from the bed, to the garden, and then to the kitchen. Being a charismatic, much loved Head of House, Tobi does not have to work too hard to win over the affection of other people. Members of The Black Knight team would have gladly swapped one of their team members to have Tobi in their team. Cee-C on the other hand is not well-known to other Housemates, could she be jeopardizing her team by not making more of an effort to connect with others?

Big Brother came down hard on the Housemates for their blatant disregard of the House rules. In an eye-brow raising moment, Biggie even told Khloe to hush. This being the season of Double Wahala, could that mean double punishment if they continue to not comply? If so, how much worse could it get?

Khloe has made no secret of the fact that she is a strong and opinionated person but over the last two days things have become explosive and she seems to have made enemies out of just about everyone.

The Task and the tears

Yesterday saw the Housemates losing their Wager due to their bad behaviour in the House but once again Khloe was at the centre of all the controversy when she blatantly insulted and upset Vandora, Ahneeka, Cee-C, Princess and Alex all in one night with her blatant disregard for anyone’s feelings. It was not just the ladies who felt jilted by her, Tobi being the HOH was completely flabbergasted at the fact that Khloe would not apologise to anyone or take any responsibility for her actions. Phrases like “leave your emotional bags at home” and “this behaviour in MY house” from Khloe has the Housemates gasping with disbelief. How will this effect Khloe’s relationship with Big Brother?

Obviously K.Brule is the one taking the most strain im all of this drama due to his pairing with Khloe, even after sharing an intimate moment over some pillow talk last night, it appears this has made no difference in Khloe’s approach to the game and the other Housemates. Nothing has been resolved and even after two different attempts from K.Brule this morning to try and talk to her about her actions are going to ultimately affect him, it was met with nothing but hostility and swearing from Khloe. Is Khloe taking her disregard too far by not caring about K.Brule’s status in the House? Surely team work is the aim of the Double Wahala game but maybe this is all part of a strategy?

Khloe has become the name on everyone’s lips, this will either work for or against her. Only time will tell.

Biggie imposes a real Naija style punishment in order to try and get the Housemates to realize that he doesn’t play. After a wild few days of conflict, confusion and of course, the big loss, Housemates are told they need to work in pairs to separate a huge bowl of rice and beans.

In Biggie’s words “It is time for the reward for your awful behavior during the week.”, he takes a jab at their “love of food” as a ninja brings in a colossal bowl, filled to the brim with rice and beans all mixed together.

The first to step up to the plate were Angel, Ifu Ennada, Miracle and Nina who have both made relatively good pairs despite Mina‘s drama earlier in the week. They are cut off shortly after when Biggie tells them to separate each grain of rice individually as opposed to in bulk.

The Housemates were gobsmacked and attempted to appease Biggie’s wishes but things only got more intense when Anto was told she could sit out the rest of the Task due to the fact that she was the only one really doing it properly.

Even though everyone kept on doing the Task incorrectly, including Tobi (HOH), eventually everyone seemed to get into the swing of things and worked together like a well-oiled machine.

Biggie’s game was clearly to try and bring everyone together, and in a way it worked. There were evident moments of bonding between almost everyone, Alex and Leo, Teddy A and BamBam, Anto and Lolu. They could all be seen leaning on each other, laughing and laying on each other’s laps. It was no surprise at all that Khloe was not interested in lightening the mood and kept a sour look on her face throughout, she also made no attempt to get closer to K.Brule or any of the Housemates for that matter.

It’s a pity that the Housemates have to spend their Friday tackling tiny grains of rice and not celebrating but maybe this will teach them to get in the game and start respecting Biggie.

The outcome of today’s nit picking Task is definitely going to have an effect on the social dynamic of the House, what do you think it will be?

It’s when the going gets tough that one needs friends, and these newly formed couples are such a brilliant idea from Big Brother. Indeed the punishment turned out to be a frustrating experience to say the least, so much so that Housemates turned to each other for support and more. Mina are getting more explicit about their feelings, teasing, giggling and gazing into each other’s eyes like a pair of old lovers. Oddly enough, K_Square seem to have fallen for each other irrespective of Khloe’s volatile nature. She has taken so much heat from the House, yet her mood swings seem to flare up whenever Cebi are in sight. Although, there is little to add about the pace at which Cebi have multiplied their public display of affection: from Tobi’s soft strokes of Cee-C hair, to massaging her feet, their intimacy was plain to see.  Even though Cebi stole the limelight from Bamteddy, it wasn’t such a bad thing after all as Bamteddy’s bond kept growing away from the cameras in a hammock.  As for Angel, he was seen hovering over Ahneeka like bees over honey and Rico Swavey didn’t bat an eyelid, only to catch up later as he gave Ahneeka her first guitar lesson!

The first Payporte Arena Games of the season are upon us. After Head of House Tobi read the instructions to Housemates, there was a moment of confusion as they didn’t know if they were free to move away from the punishment bowls. For a split second anxious glances were exchanged until Big Brother’s voice quickly blast out that punishments were suspended until further notice. For the Games, Housemates were instructed to complete an obstacle course, crawl through a tunnel, pile tires up into a tower and solve a jigsaw puzzle in the shape of the Big Brother eye for the chance to win a luxury treatment the next day. The game started only once Housemates wore safety gears. To everyone’s surprise, it is Bitto who won the first time around. Biggie was so stunned that he had earlier taken a jab at Bitto and said “you are more athletic than you look”. Bitto wasn’t the only one to be poked at by Biggie’s dry sense of humor. Never one to discriminate, Biggie also pulled K.Brule’s leg when the latter missed a piece of the jigsaw and launched “it is doubtful that you have a career as a painter”.Thankfully K.Brule is a musician, and a good one at that.

Have you been watching? What did you think of the Day 5’s activities?