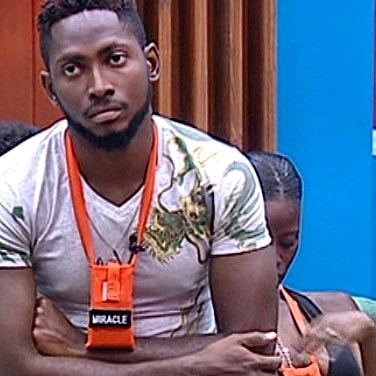 Did you watch day 9 of the Big Brother Naija 3 reality show?

All Bets are Off

Last night’s mock Nomination left Housemates shell-shocked and downright dumbstruck. Besides the fact that bonds will be broken, it isn’t easy living in a House that lurks with agendas.

Earlier in the day, Tobi narrowly won the Head of House title for a second week, snatching the coveted position from Teddy A. However, we couldn’t help but notice just how much tension there was when Alex claimed that Tobi cheated because he seemed to know exactly what he was doing. Although the pair didn’t even try to defend their honor, the overall reaction in the House after the fact further proves our theory. The Housemates just aren’t about this reign.

The massive revelations that emerged from the Diary Room confirmed that gone were the niceties and sweet-talks, hunger is now the name of the game. Hunger for the ₦25 million prize money, an end that justifies all means including betrayal, seduction and back-stabbing. We guess it’s true what they say, a book should never be judged by its cover because the content might just be a shocker. We too are shook fam!

It came as no surprise that at the first occasion, during the fake Nomination, Tobi seized the opportunity to put Teddy A and BamBam up for Eviction. If the pair wasn’t deemed as competition before, they are now.

Today has been action packed, first the wager, HoH task and now Biggie has thrown in another activity to get the Housemates talking.

We all know that things turn up a few notches in the Big Brother House and there have been instances where consent has been questioned. The topic of Sexual Consent is still highly controversial and can get extremely heated when not dissected properly. Biggie in all his wisdom has handed the Housemates the Task of dissecting Sexual Consent through creating a Radio Drama and Pantomime.

The topic seemed to have hit home because the Housemates dove right in and even brought up instances where they weren’t aware of the lines that had been crossed. Vandora shared her own rape experiences which further broke the shell and allowed the Housemates to drive the topic into border-less dimensions. Though the women, especially Vandora, BamBam, Anto and Princess were the most vocal, the men challenged the narrative and mentioned just how this was often viewed from a single perspective which favored women as victims and men as perpetrators. It’s true that in the world we live in, both women and men are victims, men too can be violated.

This Task allowed us to see a different side to team Angelifu (Angel and Ifu Ennada). We saw them assume leadership because of their production background and they began to effortlessly plan their Pantomime. They definitively were in their element. Not only has the Task constructed common ground for the Housemates, it has also helped the two genders to step into each other’s shoes and gist on that perspective.

So, the long awaited Secret Task has landed and promises bucket loads of drama. Biggie’s consistency as a trickster just drowns us all in a pool of anxiety. The man literally censored Lolu and there’s no way we’re finding out unless he spills.

The Secret Task Broken Down

The first Housemate to answer the Big Brother phone is automatically selected to play Biggie’s soldier. They are to carry out whatever Task given without uttering a word to any of the Housemates, not even to their partners. Knowing Biggie, should the milk spill the goat will squeal. There will be dire consequences if any of the other Housemates find out what the ‘soldier’ had been tasked with. Dis na be battle o.  Also, there might be instances where other Housemates find out what the battle man has been tasked with without them actually giving it up, often due to behavioral changes and sudden sparked interests. Should this happen, the sniper will be deemed as having failed the Task and will drink from the cup of consequences.

It won’t be easy, but should Lolu manage to return all the eggs un-cracked, he will be rewarded by simply not being punished. Biggie’s story get kay-leg o. When Tobi was Tasked with fishing for secrets from the other Housemates and managed to find out about BamBam’s visions and Rico Swavey having been on TV and not wanting anyone to find out about it, Biggie made him say it out loud during a rather peppery moment, in the Arena during Wager judgment.

Meow! The Claws come out…

After the Nominations last night, you can literally cut the tension with a knife inside the House, small things become big things when the ladies all break into a huge argument centered around cooking and distribution of food. Quarrels and passive aggression seem to be the order of the day.

The phrase “too many cooks in the kitchen” would be the perfect way to describe the cause of today’s cat-fight. Cee-C made lunch in the House that left much to be desired. Many of the Housemates did not like her food or didn’t get any at all (in the case of Lolu). This was obviously something that Princess felt she could not keep to herself and made it known that she was not feeling Cee-C’s skills (or lack thereof) in the kitchen.

Whether it was all a part of a strategy or a manipulation tactic, Cee-C was somehow able to turn the series of events around and make it look like Princess was the one in the wrong. We all know that Princess is very outspoken and Cee-C is more reserved, not to mention that she is paired with HoH Tobi and tries to wield that power but the sudden turn of events and the escalation was so abrupt, not even Biggie saw it coming. Khloe, Alex and Cee-C began letting rip in the closet about Princess, then Ifu Ennada got involved and tried to act as a neutral force who was trying to resolve the problem between the two parties. This completely backfired and instead of neutralizing the situation, Ifu Ennada was more of a catalyst to an estrogenic explosion. The ladies went off, screaming and shouting till kingdom come. This all took place straight after the rather tenuous sexual consent Task and smack bam in the middle of Diary sessions!

The guys in the House really kept their distance during this escapade but almost all the ladies got involved, after the initial heat dies down, there was a small act of reconciliation between Alex and Princess but nothing solid. Slowly the guys started to lend an ear to their ladies of choice, Leo and Teddy A, tried to get the scoop, however the divide was still very transparent. One thing that was noticeable in all of the ruckus was the fact that Tobi was nowhere to be found, surely as HoH he should have come to defend his lady? Nina also chose to stay silent during the combative incident but did express in her Diary session that she felt many of the Housemates were being off with her.

Not keeping it in the Closet

What alliances will form now hot on the heels of today’s fight and how will this affect the social dynamic in the House going forward?

Have you been watching? What did you think of the Day 9 activities?