#LiterallyWhatsHot: Cheesy, But Instructive - A Review of Amaka Azie's "Thorns and Roses"

“Rapid emotions filtered through her large expressive eyes; surprise, fear, panic. And then he saw desire. Placing her palms on his chest, she touched his lips with hers, a very soft touch, and then retreated again. He tried to keep still, his body was ablaze with want, but he couldn’t move, didn’t want to. It was killing him, but he didn’t want to do anything to drive this moment along. He waited, his heart fluttering at a dangerous rate, his body alert and poised. She repeated the kiss, this time flickering her tongue over his lips. This pushed him over an invisible edge and with a deep groan, he captured her mouth with his…” 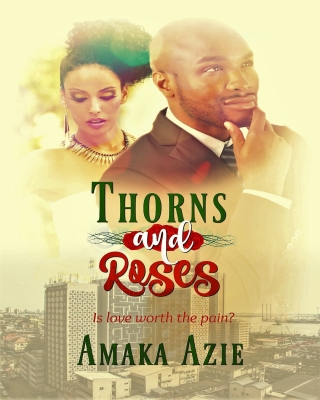 The novel “Thorns and Roses” is the story of Ifeoma, a lady whose father continually abuses her mother for the offence of giving birth to only female children. She learns of her father’s plan to give out Chioma (her youngest sister) in marriage to a man named Chibundu, and somehow convinces the latter to take her instead, offering some money as part of the “swap” deal. However, Ifeoma runs away with her three sisters before the wedding takes place. She drops out of school and with her meagre savings, rents a shop in Lagos where she sells food to take care of her siblings.

Chuma, a choleric and manipulative businessman, begins to eat at Ifeoma’s restaurant regularly. They take notice of each other, and in spite of Ifeoma’s resistance and stubborn stance, they manage to strike up a friendship. What follows is a chain of events full of passion, unpredictability, emotion, and tragedy.

The book tackles a number of issues, including Feminism, patriarchy, domestic abuse, and marginalization of the girl child. There is also room to discuss marital fidelity, communication in relationships, human temperaments, forgiveness and family bonds.

Amaka Azie’s style of writing is pretty descriptive, with lots of emphasis on little details. There is sufficient dialogue, and the steamy portions of the book are laid out in a really graphic way. The use of the flashback technique is employed too, and the language makes for easy reading.

However, the sequence of events leaves much to be desired; it does not only seem a bit rushed, it is also a tad predictable. The transition from abusive childhood to financial independence is not gripping enough, nor is there an effort to elaborate on the unraveling of Ifeoma’s marriage to Chuma before divorce comes into the picture. The arrival at a happy ending seems lazily written too, and in the end, there is a Nollywood-esque feel to all of it.

“Thorns and Roses” may be quite cheesy, but it is relatable nonetheless. It is the month of love after all, and a feel-good story never hurt anyone. In any case, one gets bored with some of the technicalities and “depth” employed by modern Nigerian writers, and sometimes a simple book is what is needed. Amaka Azie’s prose is a fitting recipe for the season, going moist is not yet a crime.

You can get a copy of the ‘Thorns and Roses’ on Okadabooks. Click here.

#LiterallyWhatsHot: “She Seeks Wool and Flax, and Willingly Works with her Hands” – A Review of Kelicha Ochonogor’s ‘Sacrifices of the Virtuous Woman’