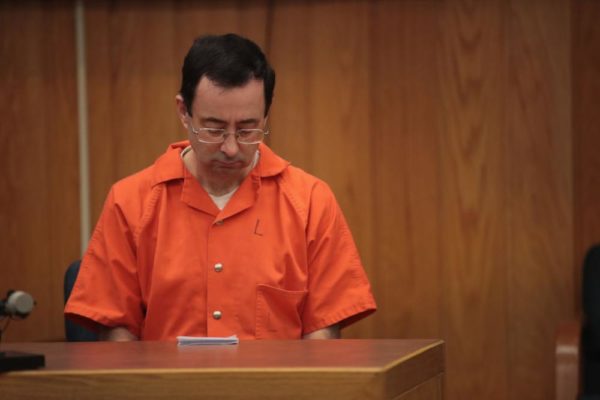 CHARLOTTE, MI – FEBRUARY 05: Larry Nassar sits in court listening to statements before being sentenced by Judge Janice Cunningham for three counts of criminal sexual assault in Eaton County Circuit Court on February 5, 2018 in Charlotte, Michigan. Nassar has been accused of sexually assaulting more than 150 girls and young women while he was a physician for USA Gymnastics and Michigan State University. Cunningham sentenced Nassar to 40 to 125 years in prison. He is currently serving a 60-year sentence in federal prison for possession of child pornography. Last month a judge in Ingham County, Michigan sentenced Nassar to an 40 to 175 years in prison after he plead guilty to sexually assaulting seven girls. (Photo by Scott Olson/Getty Images)

Former US Gymnastics doctor Larry Nassar has been sentenced to a third prison term of 40 – 125 years in jail, Guardian reports.

Nassar, who had previously pleaded guilty to molesting 7 girls under his care, had earlier been sentenced to 40 – 175 years in prison, and another 60-year federal term for possession of child pornography.

Dozens of victims came to relay their experience at his trial, after the 156 girls and women testify against him at his previous sentencing hearing.

Nassar, who was describes as “a revered figure in sports medicine,” had more than 260 women and girls say they were assaulted by him.